The poles control much of our global climate. Giant ice sheets in Antarctica behave like mirrors, reflecting the sun's energy and moderating the world's temperatures. The waxing and waning of these ice sheets contribute to changes in sea level and affect ocean circulation, which regulates our climate by transporting heat around the planet.

Despite their present-day cold temperatures, the poles were not always covered with ice. New climate records recovered from Antarctica during the recent Integrated Ocean Drilling Program (IODP) "Wilkes Land Glacial History" Expedition show that approximately 53 million years ago, Antarctica was a warm, sub-tropical environment. During this same period, known as the "greenhouse" or "hothouse" world, atmospheric CO2 levels exceeded those of today by ten times.

How did this change happen so abruptly and how stable can we expect ice sheets to be in the future?

To answer these questions, an international team of scientists participating in the Wilkes Land Glacial History Expedition spent two months aboard the scientific research vessel JOIDES Resolution in early 2010, drilling geological samples from the seafloor near the coast of Antarctica. Despite negotiating icebergs, near gale-force winds, snow, and fog, they managed to recover approximately 2,000 meters (over one mile) of sediment core.

"These sediments are essential to our research because they preserve the history of the Antarctic ice sheet," observed Dr. Carlota Escutia of the Research Council of Spain CSIC-University of Granada, who led the expedition, along with co-chief scientist Dr. Henk Brinkhuis of Utrecht University in the Netherlands. "We can read these sediments like a history book," Brinkhuis explained. "And this book goes back 53 million years, giving us an unprecedented record of how ice sheets form and interact with changes in the climate and the ocean."

Wilkes Land is the region of Antarctica that lies due south of Australia, and is believed to be one of the more climate-sensitive regions of the polar continent. The new core samples collected during IODP's Wilkes Land expedition are unique because they provide the world's first direct record of waxing and waning of ice in this region of Antarctica.

Combined, the cores tell the story of Antarctica's transition from an ice-free, warm, greenhouse world to an ice-covered, cold, dry "icehouse" world. Sediments and microfossils preserved within the cores document the onset of cooling and the development of the first Antarctic glaciers and the growth and recession of Antarctica's ice sheets. Cores from one site resemble tree rings – unprecedented alternating bands of light and dark sediment preserve seasonal variability of the last deglaciation that began some 10,000 years ago.

Understanding the behavior of Antarctica's ice sheets plays a fundamental role in our ability to build robust, effective global climate models, which are used to predict future climate. "These models rely on constraints imposed by data from the field," the co-chiefs pointed out. "Measurements of parameters such as age, temperature, and carbon dioxide concentration provide invaluable inputs that help increase the accuracy of these models. The more we can constrain the models, the better they'll perform – and the better we can predict ice sheet behavior."

What's next? The science team now embarks on a multi-year process of on-shore analyses to further investigate the Wilkes Land cores. Age-dating and chemistry studies among other analyses are expected to resolve changes in Antarctica's climate over unprecedented short timescales (50-20,000 years). Data collected from the Wilkes Land expedition will complement previous research from drilling operations conducted elsewhere in the Antarctic over the last 40 years. Together, this research will provide important age constraints for models of Antarctic ice sheet development and evolution, thereby forming the basis for models of future ice sheet behavior and polar climatic change.

IODP is an international marine research program dedicated to advancing scientific understanding of the Earth through drilling, coring, and monitoring the sub-seafloor. The JOIDES Resolution is a drilling vessel managed by the U.S. Implementing Organization of IODP (USIO), and funded by the U.S. National Science Foundation (NSF). Together, Texas A&M University, Lamont-Doherty Earth Observatory of Columbia University, and the Consortium for Ocean Leadership comprise the USIO.

IODP is supported by two lead agencies, NSF in the U.S. and Japan's Ministry of Education, Culture, Sports, Science, and Technology. Additional program support comes from the European Consortium for Ocean Research Drilling (ECORD), the Australian-New Zealand IODP Consortium (ANZIC), India's Ministry of Earth Sciences, the People's Republic of China (Ministry of Science and Technology), and the Korea Institute of Geoscience and Mineral Resources.

Through the looking glass: Scientists peer into Antarctica's past to see our future climate 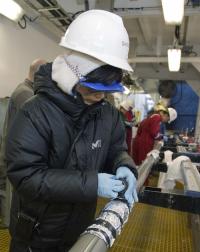