BATON ROUGE – Many scientists today have embraced social media as tools to communicate their research and to engage broader audiences in scientific discovery and its outcomes. But the rise of the “social media scientist” has also led communicators and scholars to ask an important and often overlooked question: Do people trust the scientists who show up in their social media feeds?

The answer may depend on how these scientists portray themselves, according to a new study conducted by researchers at LSU, University of Delaware, U.C. Berkeley and University of Toronto. The study, titled “Using selfies to challenge public stereotypes of scientists,” which was published today in PLOS ONE, reports that scientists who post “selfies” or self-portraits in their Instagram feeds foster trust and help change public stereotypes that scientists are competent but not warm.

The study builds on seminal work by Princeton University social psychologist Susan Fiske suggesting that scientists have earned Americans’ respect but not their trust. Trust depends on two perceived characteristics of an individual or social group: competence and warmth. Perceptions of competence involve the belief that members of a particular social group are intelligent and have the skills to achieve their goals. Perceptions of warmth involve the belief that the members of this group also have benevolent goals, or that they are friendly, altruistic, honest and share common values with people outside of their group. Together, perceptions of competence and warmth determine all group stereotypes, including stereotypes of scientists.

While perceptions of both the competence and the warmth of members of a social group are important in determining trust and even action, it turns out that perceived warmth is more important. And, as Fiske showed in a study published in 2014 in Proceedings of the National Academy of Sciences, Americans see scientists as competent but only as moderately warm. Scientists’ perceived warmth is on par with that of retail workers, bus drivers and construction workers but far below that of doctors, nurses and teachers.

The researchers of the new PLOS ONE study launched the investigation into perceptions of scientist Instagrammers after being struck with the idea that the competence versus warmth stereotype of scientists may not be an insurmountable challenge given the power of social media to bring scientists and nonscientists together.

“Social media channels, like Instagram, provide an exciting opportunity for scientists to improve their public image,” said co-author Becky Carmichael, LSU Communication across the Curriculum science coordinator. “We wondered whether seeing the faces of friendly, honest scientists sharing glimpses of their everyday work in the science lab or field could help change the problematic stereotypes that scientists are competent but not warm. Instagram is also a place where people with different backgrounds and interests can come together and even get to know each other via common hashtags. K-12 teachers are using social media in the classroom to introduce young students to scientists online. This multimedia-rich interaction could help broader audiences get to know the friendly, sociable, fun and relatable scientist.”

To explore this idea, the team launched a research project popularly referred to as ScientistsWhoSelfie, based on the hashtag the researchers introduced to raise awareness about the project in an online crowdfunding campaign that raised more than $10,000. A few dozen scientists around the globe helped to develop a series of images for the project.

The idea was to show research participants images published to one of four different “Scientists of Instagram” rotation-curation accounts and then to ask them questions about their perceptions of the scientists represented in these images as well as of scientists in general. Each participant was shown three types of images: a scientific setting or a piece of equipment such as a microscope, a bioreactor on the lab bench or a plant experiment set-up in a greenhouse with no humans in any of the images but with captions attributing the images to either male or female scientists by name; a smiling male scientist looking at the camera in the same scientific setting; or a smiling female scientist looking at the camera in the same scientific setting.

“Seeing scientist selfies, but not images of scientific objects posted by scientists online, boosted perceptions that scientists are both competent and warm,” said lead author LSU alumna Paige Jarreau, who is a former LSU science communication specialist and current director of social media and science communication at LifeOmic. “We think this is because people who viewed science images with a scientist’s face in the picture began to see these scientist communicators on Instagram not as belonging to some unfamiliar group of stereotypically socially inept geniuses, but as individuals and even as ‘everyday’ people with ‘normal’ interests - people who, like us, enjoy taking selfies! Female scientists, in particular, when represented in substantial numbers and diversity, may cause viewers to re-evaluate stereotypical perceptions of who a scientist is.”

“Future studies should explore how different types of selfies by scientists are evaluated by broader audiences and how scientists can best build relationships with these audiences,” said Lance Porter, who is the director of the LSU Social Media Analysis & Creation Lab and the Doris Westmoreland Darden Distinguished Professor in the LSU Manship School of Mass Communication. “But we believe that overall, scientists who use social media to humanize themselves are helping to foster transparency of science, public trust and interest in science.” 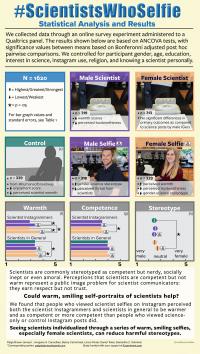