MIAMI--A new study from an international team of scientists found commercial fishing vessels target shark hotspots, areas where sharks tend to congregate, in the North Atlantic. The researchers suggest that sharks are at risk of being overfished in these oceanic hotspots.

Neil Hammerschlag, research assistant professor at the University of Miami (UM) Rosenstiel School of Marine and Atmospheric Science and UM Abess Center for Ecosystem Science and Policy, was part of the scientific team that published their findings in the Jan. 25 issue of the journal Proceedings of the National Academy of Sciences. The authors report in the study that catch quotas for sharks by commercial fishers might be necessary to protect oceanic sharks.

"Our research clearly demonstrates the importance of satellite tagging data for conservation," said Hammerschlag, director of the UM Shark Research and Conservation Program who conducted the satellite tagging and tracking of several shark species in the northwestern Atlantic for the study. "The findings both identify the problem as well as provide a path for protecting oceanic sharks."

During a four-year period from 2005 to 2009, the researchers tracked more than 100 sharks equipped with satellite tags from six different species in the North Atlantic while concurrently tracking 186 Spanish and Portuguese GPS-equipped longline fishing vessels. They found that the fishing vessels and sharks occurred in ocean fronts characterized by warm water temperature and high productivity, including the Gulf Stream and the North Atlantic Current/Labrador Current Convergence Zone near Newfoundland.

According to the researchers, about 80 percent of the range for two of the most heavily fished species tracked--the blue and mako sharks--overlapped with the fishing vessels' range, with some individual sharks remaining near longlines for over 60 percent of the time they were tracked. Blue sharks were estimated to be vulnerable to potential capture 20 days per month, while the mako sharks' potential risk was 12 days per month.

"Although we suspected overlap might be high, we had no idea it would be this high. Space-use overlap on this scale potentially increases shark susceptibility to fishing exploitation, which has unknown consequences for populations," said Nuno Queiroz of the University of Porto, Portugal, the lead author of the study.

Tens of millions of ocean-dwelling sharks are caught by commercial fishing operations each year. The researchers suggest that a lack of data on where sharks are likely to encounter fishing vessels has hampered current shark conservation effort.

The researchers propose that because current hotspots of shark activity are at particularly high risk of overfishing, the introduction of conservation measures such as catch quotas or size limits will be necessary to protect oceanic sharks that are commercially important to fleets worldwide at the present time.

Hammerschlag's work was supported by the Disney Worldwide Conservation Fund, Batchelor Foundation, and West Coast Inland Navigation District in Florida. The research study was part of the European Tracking of Predators in the Atlantic (EUTOPIA) initiative.

The University of Miami is one of the largest private research institutions in the southeastern United States. The University's mission is to provide quality education, attract and retain outstanding students, support the faculty and their research, and build an endowment for University initiatives. Founded in the 1940's, the Rosenstiel School of Marine & Atmospheric Science has grown into one of the world's premier marine and atmospheric research institutions. Offering dynamic interdisciplinary academics, the Rosenstiel School is dedicated to helping communities to better understand the planet, participating in the establishment of environmental policies, and aiding in the improvement of society and quality of life. For more information, visit: http://www.rsmas.miami.edu. Information on the University of Miami's Shark Research and Conservation program can be found at http://www.SharkTagging.com 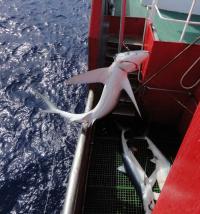