(Santa Barbara, Calif.) — When UC Santa Barbara geochemist David Valentine and colleagues published a study in early 2011 documenting how bacteria blooms had consumed almost all of the deepwater methane plumes following the Deepwater Horizon oil spill in 2010, some people were skeptical. How, they asked, could almost all of the lethal gas emitted from the Deepwater Horizon well just disappear?

In a new study published in the Proceedings of the National Academy of Sciences (PNAS), Valentine, Igor Mezic, a professor of mechanical engineering at UCSB, and their co-authors explain how they used an innovative computer model to demonstrate the roles of underwater topography, currents, and bacteria of the Gulf of Mexico in the disappearance of methane and other chemicals that spewed from the well for nearly three months after it erupted about 40 miles off the Louisiana coast on April 20, 2010.

The new study, according to Valentine, is a logical extension of his 2011 study, in which he and his research partners explained the role of bacteria in consuming more than 200,000 metric tons of dissolved methane. That study, published in the journal Science, was recently chosen as number 39 in Discover magazine's Top 100 stories of 2011.

"It seemed to me we were putting together a lot of pieces," Valentine said. "We would go out, take some samples, and we would study what was happening in those samples, both during and after the spill. There was a transition of the microorganisms and a transition of the biodegradation, and it was very clear that we needed to somehow incorporate the movement of the water. I knew there was going to be an important component of the physics of the water motion, where the water went. I realized that linkage might provide that third leg to the stool for this thing to sit right."

So Valentine turned to Mezic, who had published a study in 2011 forecasting where the oil slick produced by the Deepwater Horizon spill would spread. "Our work was contributing on the side of here's where the oil leaked and here's where it went," Mezic said. "Dave and I met and said, 'Wouldn't it be beautiful if we could put a nice, detailed hydrodynamic model together with a nice, detailed bacterial model?' So we sat down and, in the course of an hour, we had the basic tenets of the model that combined the two."

Their computer model was loaded with data on the chemical composition of hydrocarbons flowing into the Gulf of Mexico, and seeded with 52 types of bacteria to consume the diverse hydrocarbons. The physical characteristics were based on the Navy's model of the Gulf's ocean currents, and on observations of the water's movements immediately after the spill and for several months after it ended.

The scientists then sought the help of Mezic's former colleagues — engineers at the University of Rijeka in Croatia. "We needed somebody to produce the analytics, build the software," Mezic said. "It was a big task, a mad rush, but they did it. The power behind this is a tour de force. A typical study of this kind would take a year, at least. We found a way that led us to answers in three or four months."

The model revealed that one of the key factors in the disappearance of the hydrocarbon plumes was the physical structure of the Gulf of Mexico. "It's the geography of the Gulf," Valentine said. "It's almost like a box canyon. As you go northward, it comes to a head. As a result, it's not a river down there; it's more of a bay. And the spillage happened in a fairly enclosed area, particularly at the depths where hydrocarbons were dissolving."

When the hydrocarbons were released from the well, bacteria bloomed. In other locations, those blooms would be swept away by prevailing ocean currents, but in the Gulf of Mexico, they swirled around at great depths like a washing machine, and often circled back over the leaking well, sometimes two or three times.

"What we see is that some of the water that already had been exposed to hydrocarbons at the well and experienced bacterial blooms, then come back over the well," Valentine said. "So these waters already have a community in them, and now they're getting a second input of hydrocarbons. As the water comes back over, the organisms that have already bloomed and eaten their preferred hydrocarbons immediately attack and go after certain compounds. So they are fed this new influx of hydrocarbon. The result is that, when you have these developed communities coming back over the wellhead, they consume the hydrocarbons much more quickly, and the pattern of the bacterial composition and hydrocarbon composition behaves differently. It changes at a different rate than when the waters were first exposed."

The model allowed the scientists to test this hypothesis and look at some of the factors that had been measured: oxygen deficits and microbial community structure. "And what we found was that we see very good agreement between the two," Valentine said. "We have about a 70 percent success rate of hitting where those oxygen declines were. It means that not only is the physics model doing a good job of moving the water in the right place, but also that the biology and chemistry are doing a good job, because you need those to get the oxygen declines. It's really a holistic view of what's going on."

There are valuable lessons to be learned from this study, both scientists said. "It tells us that the motion of the water is going to be an extremely important component in determining how rapidly the different hydrocarbons are broken down," Valentine said. "It gives us the concepts that we can now apply to other situations, if we understand the physics."

Mezic said that this should be a wake-up call for anyone thinking of drilling for oil. "The general perspective is that we need to pay more attention to where the currents are flowing around the places where we have spills," he said. "We don't have a model for most of those. Why not mandate a model? This one worked — three quarters of the predictions were correct. For almost everything, you build a model. You build an airplane, you have a model. But you can drill without having a model. It's possible we can predict this. That's what the model is for."

The research was supported by the National Science Foundation, the Department of Energy, and the Office of Naval Research. Besides Valentine and Mezic, other co-authors are Senka Macesic, Nelida Crnjaric-Zic, and Stefan Ivic, of the University of Rijeka in Croatia; Patrick J. Hogan of the Naval Research Laboratory; Sophie Loire of the Department of Mechanical Engineering at UCSB; and Vladimir A. Fonoberov of Aimdyn, Inc. of Santa Barbara. 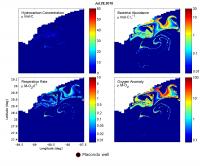 Annotated Still Shot of a Simulation Video (1 of 2) 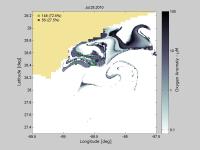 Annotated Still Shot of a Simulation Video (2 of 2)