When doctors diagnose a torn ligament, it's usually because they can see ruptures in the ligament's collagen fibers, visible on a variety of different scans. However, they also often treat patients with many of the symptoms of a tear, but whose ligaments don't show this kind of damage.

Researchers from the University of Pennsylvania's School of Engineering and Applied Science are using network science to gain new insights into these "subfailure" injuries, which can lead to pain and dysfunction despite the lack of obvious physical evidence. The mechanisms that lead to these symptoms happen on a microscopic level and can't be detected by existing clinical tools.

In a study recently published in the Journal of the Royal Society Interface, the Penn team has put human ligament samples to the test, stretching them until they tear, while looking at these microscopic features. Using a polarized-light-based system that can reveal the angles of collagen fibers in the tissue, the researchers have shown how groups of neighboring fibers changing their orientations in tandem prefigures the spots where failure eventually occurs.

These insights could help identify regions of ligaments that are prone to tearing, and could eventually be incorporated into new diagnostic techniques or therapies. It could also help explain the painful symptoms patients experience in sub-failure injuries.

Earlier work in the Winkelstein lab showed microscopic evidence of the first tears appearing in a ligament as it was put under strain. These visible ruptures are often initiated by disorganization of ligament fibers amounted to a few pixels on an optical scan, so Zhang was interested in adding more context to the picture.

"We're investigating the mechanisms of how injury even if it isn't visible induces pain," Zhang said. "Our hypothesis was that the cells embedded in the collagen matrix are being stretched during ligament loading, affecting cell behaviors, so we set out to see how the matrix is being reorganized under strain."

"To bridge single fiber level changes to the bulk mechanics of the tissue," Winkelstein said, "we explored whether network analysis could provide insight. We want to understand if there is coordination between fibers during loading, and whether they recognize as groups."

Zhang was enrolled in Bassett's introductory class on network science, in which students are encouraged to bring their own datasets to serve as illustrative examples. Her data were obtained from experiments in the Winkelstein lab during which ligament samples were stretched until failure while observing them with an imaging system using polarized light. Much like how polarized sunglasses work by blocking all light aligned at a particular angle, this system can show the orientations of collagen fibers in the ligament by measuring how much light they allow through.

"With this method, "Zhang said, "you can track changes in collagen fiber orientation during loading, and you can measure the angles of the collagen fibers and tell how strongly they are aligned."

Network science investigates how individual elements of complex systems interact to determine the system's overall behavior. By using analysis techniques derived from this discipline, Zhang was able to show the degree to which concerted reorientation prefigured the spots where failure first occurred.

"Network science offers a fundamental explanatory mechanism for subfailure damage, a process that we think may lead to pain," Bassett said. "If a single fiber is turning, a tear is unlikely, as is the activation of pain fibers; but when there is a coordinated change in many fibers, pain and tears may be more likely."

The team's findings raise the possibility of particularly injury-prone "domains," or anomalous sub-regions within the tissue that arise from unique alterations of an individual's anatomy. The presence and location of such domains might explain why different people respond to the same type of injury with different outcomes.

Their network-science-based analysis is also being pursued in experiments in which Zhang is using synthetic tissues she has designed to test theories of failure in a more systemic way.

"Since we have hypotheses based on the networks," Winkelstein said, "we can now examine those relationships between ligament and cells and the grouping of both. By controlling them in the lab by making them in vitro to specification, we could start to actually test how failure happens and what that means on the cellular level."

Penn engineers use network science to predict how ligaments fail 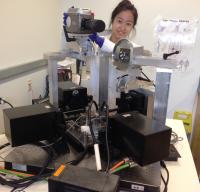