TALLAHASSEE, Fla. -- A dramatic oil spill, such as the Deepwater Horizon accident in the Gulf of Mexico a decade ago, can dominate headlines for months while scientists, policymakers and the public fret over what happens to all that oil in the environment. However, far less attention is paid to the fate of a petroleum product that has been spread deliberately across the planet for decades: asphalt binder.

Now a study by chemists at the Florida State University-headquartered National High Magnetic Field Laboratory shows that asphalt binder, when exposed to sun and water, leaches thousands of potentially toxic compounds into the environment. The study was published in the journal Environmental Science & Technology.

Asphalt binder, also called asphalt cement, is the glue that holds together the stones, sand and gravel in paved roads. The heavy, black, sticky goo is derived from bottom-of-the-barrel crude oil at the tail end of the distillation process.

The MagLab, funded by the National Science Foundation and the State of Florida, is a world leader in the field of petroleomics, which studies the mind-numbingly complex hydrocarbons that make up crude oil and its byproducts. Using high-resolution ion cyclotron resonance (ICR) mass spectrometers, chemists there have developed expertise in identifying the tens of thousands of different types of molecules that a single drop can contain, and how that composition can be changed by time, bacteria or environmental conditions.

Ryan Rodgers, director of petroleum applications and of the Future Fuels Institute at the MagLab, had wanted for years to study asphalt binder using the ICR instruments. It was a logical next step in his group's years-long effort to better understand the structure and behavior of petroleum molecules and their potentially toxic effects. Previous studies had shown that soils and runoff near paved roads exhibit higher concentrations of polycyclic aromatic hydrocarbons (PAHs), which are known to be carcinogenic. Rodgers suspected there were dots connecting those PAHs and asphalt binder, and he wanted to find them.

"The long-term stability of petroleum-derived materials in the environment has always been a curiosity of mine," said Rodgers, who grew up on the Florida Gulf Coast. "Knowing their compositional and structural complexity, it seemed highly unlikely that they would be environmentally benign. How do silky smooth black roads turn into grey, rough roads? And where the heck did all the asphalt go?"

He finally acquired a jug of asphalt binder from a local paving company and handed the project off to Sydney Niles, a Ph.D. candidate in chemistry at Florida State, and MagLab chemist Martha Chacón-Patiño. They designed an experiment in which they created a film of binder on a glass slide, submerged it in water, and irradiated it in a solar simulator for a week, sampling the water at different timepoints to see what was in it. They suspected that the sun's energy would cause the reactive oxygen-containing compounds in the water to interact with the hydrocarbons in the binder, a process called photooxidation, thus creating new kinds of molecules that would leach into the water.

"We had this road sample and we shined fake sunlight on it in the presence of water," explained Niles, lead author on the paper. "Then we looked at the water and we found that there are all these compounds that are derived from petroleum, and probably toxic. We also found that more compounds are leached over time."

The hydrocarbons they found in the water contained more oxygen atoms. The scientists were confident that the sun was indeed the mechanism behind the process because far fewer compounds leached into a control sample that had been kept in the dark, and those had fewer oxygen atoms. In fact, the amount of water-soluble organic compounds per liter that the team found in the water of the irradiated sample after a week was more than 25 times higher than in the sample that had been left in the dark. And, using the lab's ICR magnets, they detected more than 15,000 different carbon-containing molecules in the water from the irradiated sample.

Given the general toxicity of PAHs, these results are cause for concern, Niles and Rodgers said. But the team will need to do more experiments to investigate that toxicity.

"We have definitively shown that asphalt binder has the potential to generate water-soluble contaminants, but the impact and fate of these will be the subject of future research," Rodgers said.

They also plan more studies to look at exactly how the compounds are transforming and if different categories of petroleum molecules behave differently.

Niles worries about hydrocarbons in and out of the lab. If she forgets to bring her reusable produce bags to the grocery store, she'd rather juggle her veggies on the way to the register than use a store-furnished plastic bag. Although these findings aren't good news for the planet, she said, they could lead to positive change.

"Hopefully it's motivation for a solution," she said. "I hope that engineers can use this information to find a better alternative, whether it's a sealant you put on the asphalt to protect it or finding something else to use to pave roads." 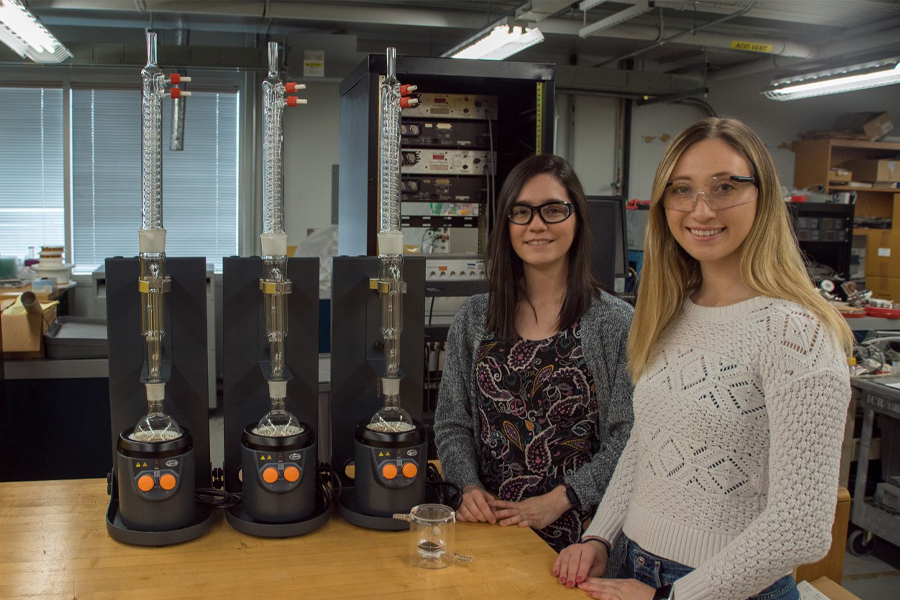