WOOSTER, Ohio--Tomorrow's tires could come from the farm as much as the factory.

Researchers at The Ohio State University have discovered that food waste can partially replace the petroleum-based filler that has been used in manufacturing tires for more than a century.

In tests, rubber made with the new fillers exceeds industrial standards for performance, which may ultimately open up new applications for rubber.

As Katrina Cornish explains it, the technology has the potential to solve three problems: It makes the manufacture of rubber products more sustainable, reduces American dependence on foreign oil and keeps waste out of landfills.

Cornish, an Ohio Research Scholar and Endowed Chair in Biomaterials at Ohio State, has spent years cultivating new domestic rubber sources, including a rubber-producing dandelion. Now she has a patent-pending a method for turning eggshells and tomato peels into viable--and locally sourced--replacements for carbon black, a petroleum-based filler that American companies often purchase from overseas.

About 30 percent of a typical automobile tire is carbon black; it's the reason tires appear black. It makes the rubber durable, and its cost varies with petroleum prices.

Carbon black is getting harder to come by, Cornish said.

"The tire industry is growing very quickly, and we don't just need more natural rubber, we need more filler, too," she explained. "The number of tires being produced worldwide is going up all the time, so countries are using all the carbon black they can make. There's no longer a surplus, so we can't just buy some from Russia to make up the difference like we used to.

"At the same time," she added, "we need to have more sustainability."

That's why she and her team are getting eggshells and other food waste from Ohio food producers.

"We're not suggesting that we collect the eggshells from your breakfast," Cornish said. "We're going right to the biggest source."

According to the USDA, Americans consume nearly 100 billion eggs each year. Half are cracked open in commercial food factories, which pay to have the shells hauled to landfills by the ton. There, the mineral-packed shells don't break down.

The second most popular vegetable in the United States--the tomato--also provides a source of filler, the researchers found. Americans eat 13 million tons of tomatoes per year, most of them canned or otherwise processed.

Commercial tomatoes have been bred to grow thick, fibrous skins so that they can survive being packed and transported long distances. When food companies want to make a product such as tomato sauce, they peel and discard the skin, which isn't easily digestible.

Cindy Barrera, a postdoctoral researcher in Cornish's lab, found in tests that eggshells have porous microstructures that provide larger surface area for contact with the rubber, and give rubber-based materials unusual properties. Tomato peels, on the other hand, are highly stable at high temperatures and can also be used to generate material with good performance.

"We may find that we can pursue many applications that were not possible before with natural rubber," Cornish added.

The new rubber doesn't look black, but rather reddish brown, depending on the amount of eggshell or tomato in it. With doctoral student Tony Ren, Cornish and Barrera are now testing different combinations and looking at ways to add color to the materials.

The university has licensed the patent-pending technology to Cornish's company, EnergyEne, for further development. 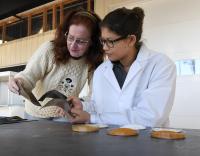