When NASA's Aqua satellite passed over the Northern Indian Ocean on May 18, it gathered water vapor data that showed the intensity of powerful Tropical Cyclone Amphan. Amphan is the equivalent of a Category 5 hurricane on the Saffir-Simpson Hurricane Wind Scale.

NASA-NOAA's Suomi NPP satellite provided a visible image of the huge Tropical Cyclone Amphan on May 18, just off the eastern coast of India. The image showed the extent of the storm, which was over open ocean, stretching from just north of Sri Lanka, north, past the Indian states of Tamil Nadu to Andrha Pradesh.

At 5 a.m. EDT (0900 UTC) on May 18, the Joint Typhoon Warning Center (JTWC) noted that Amphan's eye was centered near latitude 13.6 degrees north and longitude 86.4 degrees east, about 301 nautical miles southeast of Visakhapatnam, India. Amphan was moving to the north and had maximum sustained winds 140 knots (161 mph/259 kph).

Amphan will move north and is expected to strengthen slightly. JTWC said the storm will then gradually weaken prior to landfall near Kolkata, India in two days. 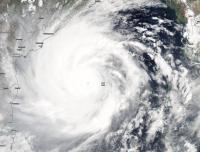