Where do the stars in our Galaxy come from? All the stars we see in the night-time sky belong to our Milky Way galaxy, and while most stars were likely born here, in the Milky Way, many appear to have originated in other galaxies and migrated to our shores. Tell-tale evidence comes from streams of stars created when small galaxies interact with the Milky Way. Eleven new stellar streams, discovered in data from the Dark Energy Survey, currently in progress at the NSF's Cerro Tololo Inter-American Observatory (CTIO), provide new evidence for this picture.

Much like the waves of migration that brought diverse groups of people to the United States, our own Galaxy is thought to have been enriched by stars from other galaxies in discrete migration events. When a small neighboring galaxy ventures close to the Milky Way, the gravitational pull of the Milky Way draws out tendrils of stars from the neighboring galaxy, which trail behind it in a stream. Many such interactions are thought to have contributed stars to the halo of the Milky Way.

DES data have been previously used to discover numerous dwarf galaxy neighbors of the Milky Way. While finding dwarf galaxies is a challenging endeavor -- they are faint and diffuse -- stellar streams are even more difficult to pick out, because their stars are spread out over a much larger area of sky. "These discoveries are possible because the Dark Energy Survey is the widest, deepest, and best-calibrated survey out there," explained Alex Drlica-Wagner (Fermilab), a member of the DES team.

Data from the first three years of the survey, which is being carried out with the Dark Energy Camera (DECam) on the 4-m Blanco telescope at CTIO, were also made publicly available in conjunction with the announcement.

Although DES was carried out primarily to understand the nature of dark energy, "The great thing about a big astronomical survey like this is that it also opens a door to many other discoveries, like the new stellar streams," explained Adam Bolton, Associate Director for the Community Science and Data Center at the National Optical Astronomy Observatory (NOAO). "With the DES data now available as a 'digital sky' accessible to all, our hope is that the data will lead to the crowdsourcing of new and unexpected discoveries."

"Indeed, the DES data have already enabled diverse science, ranging from studies of Near Earth Orbiting objects to distant quasars formed not long after the the Big Bang," added Alistair Walker (NOAO), a member of the DES team and the DECam Instrument Scientist.

The public release of the DES data continues a trend toward ever larger data sets in astronomy.

"The DES data release includes measurements of 400 million stars and galaxies, about twice the number of objects in the SDSS, the premier survey of the last decade," explained Knut Olsen, the team leader of NOAO's Data Lab. "The survey data extend deep and wide, to stars 40 million times fainter than the human eye can see, covering 1/8 of the entire sky."

Survey catalogs and images will be available through the NOAO Data Lab and the NOAO Science Data Archive. The goal of the NOAO Data Lab is to facilitate community re-use of massive data sets, like the DES data, by enabling visualization, exploration, and analysis of their images and catalogs.

In the same way that DES is a successor to the SDSS, "The Large Synoptic Survey Telescope (LSST), currently under construction on Cerro Pachon in Chile, is the next generation sky survey after DES," says Bolton. "In the 2020s, LSST will deliver a yet wider and deeper view of the Universe -- from distant galaxies, to our Milky Way, down to the Solar System -- and not just as a still photo, but as a high-definition movie that will capture the rich variability of the sky."

LSST is expected to catalog a whopping 18 billion objects in its first year of operation, dwarfing the number of objects in both the DES and SDSS catalogs (see graphic).

Toward a Big Data Future for Astronomy

The DES results and data release have strong synergy with ongoing investments at the National Science Foundation (NSF). "This result is an excellent example of how 'data mining' -- the exploration of large data sets -- leads to new discoveries," exclaimed Richard Green, Director of the NSF's Division of Astronomical Sciences. "NSF is investing in this approach through our Foundation-wide `Harnessing the Data Revolution' initiative, which encourages fundamental research in data science. We're expecting a drumbeat of exciting discoveries, particularly when the LSST data floodgates are opened!"

Bolton views the DES data release as a fantastic opportunity to prepare for this "Big Data" era. "It's a great way for all of us to exercise the new modes of investigation and analysis that will be essential in the LSST era, while also sharpening our understanding of the open questions in astrophysics and cosmology that LSST is being built to address."

The Cerro Tololo Inter-American Observatory (CTIO) is part of the National Optical Astronomy Observatory (NOAO), which is operated by the Association of Universities for Research in Astronomy (AURA) under a cooperative agreement with the National Science Foundation (NSF). NSF is an independent federal agency created by Congress in 1950 to promote the progress of science. NSF supports basic research and people to create knowledge that transforms the future. 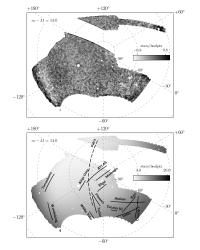 How Many Cataloged Objects in the Universe?