NASA-NOAA's Suomi NPP satellite provided forecasters with a visible image of Tropical Storm Paulette as it tracked through the Central North Atlantic Ocean on Sept. 8. Paulette, like some other tropical storms this year, has broken a season record.

Tropical Depression 17 developed on Sunday, Sept. 6 by 11 p.m. EDT about 1,160 miles (1,865 km) west of the Cabo Verde Islands. Twelve hours later on Sept. 7 at 11 a.m. EDT, it had strengthened and organized into a tropical storm and was renamed Tropical Storm Paulette.

On Sept. 8, the Visible Infrared Imaging Radiometer Suite (VIIRS) instrument aboard Suomi NPP provided a visible image of Paulette when it passed overhead. Forecasters looking at the VIIRS imagery noted that Paulette's organization had noticeably improved since last night. The tropical storm is still sheared (vertical wind shear is pushing against the storm from the northeast), with its outflow restricted to the southwest.

The National Hurricane Center noted, "Overnight AMSU imagery indicated that convection was beginning to wrap around the western portion of its circulation." The Advanced Microwave Sounding Unit (AMSU) is a multi-channel microwave radiometer installed on meteorological satellites. The instrument examines several bands of microwave radiation from the atmosphere to perform atmospheric sounding of temperature and moisture levels. That instrument flies aboard NASA's Aqua satellite and NOAA weather satellites.

At 11 a.m. EDT (1500 UTC) on Sept. 8, the center of Tropical Storm Paulette was located near latitude 18.4 degrees north and longitude 43.3 degrees west. Paulette is moving toward the northwest near 6 mph (9 kph). The estimated minimum central pressure is 995 millibars. Maximum sustained winds are near 65 mph (100 kph) with higher gusts.

A turn toward the west-northwest or west with a slight increase in forward speed is expected during the next couple of days. Moderate additional strengthening is possible today and Paulette could be near hurricane strength by tonight, Sept. 8. 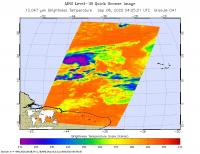