The University of Pennsylvania, Peking University and Massachusetts Institute of Technology worked on a project funded, in part by the Army Research Office, which is an element of U.S. Army Combat Capabilities Development Command's Army Research Laboratory. The research sought to develop a new design of optical devices that radiate light in a single direction. This single-sided radiation channel for light can be used in a wide array of optoelectronic applications to reduce energy loss in optical fiber networks and data centers. The journal Nature published the findings.

Light tends to flow in optical fibers along one direction, like water flows through a pipe. On-chip couplers are used to connect fibers to chips, where light signals are generated, amplified, or detected. While most light going through the coupler continues through to the fiber, some of the light travels in the opposite direction, leaking out.

Previous studies consistently suggested that a minimum loss of 25 percent at each interface between optical fibers and chips was a theoretical upper bound that could not be surpassed. Because data centers require complex and interwoven systems of nodes, that 25-percent loss quickly multiplies as light travels through a network.

"You may need to pass five nodes (10 interfaces) to communicate with another server in a typical medium-sized data center, leading to a total loss of 95 percent if you use existing devices," said Jicheng Jin, University of Pennsylvania doctoral student. "In fact, extra energy and elements are needed to amplify and relay the signal again and again, which introduces noise, lowers signal-to-noise ratio, and, ultimately, reduces communication bandwidth."

After studying the system in more detail, the research team discovered that breaking left-right symmetry in their device could reduce the loss to zero.

"These exciting results have the potential to spur new research investments for Army systems," said Dr. Michael Gerhold, program manager, optoelectronics, Army Research Office. "Not only do the coupling efficiency advances have potential to improve data communications for commercial data centers, but the results carry huge impact for photonic systems where much lower intensity signals can be used for the same precision computation, making battery powered photonic computers possible."

The team eventually settled on a design with a series of slanted bars, which break left-right and up-down symmetries at the same time. To fabricate such structures, they developed a novel etching method: silicon chips were placed on a wedge-like substrate, allowing etching to occur at a slanted angle. In comparison, standard etchers can only create vertical side walls. As a future step, the team hopes to further develop this etching technique to be compatible with existing foundry processes and also to come up with an even simpler design for etching. 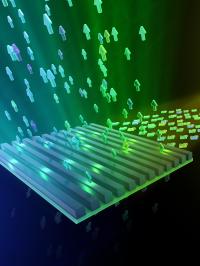