On Jan. 4 at 5:05 a.m. EST (1005 UTC), the Atmospheric Infrared Sounder or AIRS instrument that flies aboard NASA's Aqua satellite gathered temperature data on the storm using infrared light. Infrared imagery showed that strong thunderstorms were over east central Madagascar and over the center of the storm's circulation, which is located off-shore from northeastern Madagascar. Cloud tops were as cold as minus 63 degrees Fahrenheit (minus 53 degrees Celsius). NASA research has shown that storms with cloud top temperatures that cold can generate heavy rainfall.

On Jan. 4 at 5:42 a.m. EST (10:42 UTC) NASA-NOAA's Suomi NPP satellite captured this visible image of Tropical Cyclone Ava just off shore of northeastern Madagascar. The image showed a more well-rounded circulation center off the northeastern coast of Madagascar, and a large, thick band of thunderstorms feeding into the center that stretched along the north and central coasts of the island nation.

Météo Madagascar, the national weather service for the country has issued a yellow alert that covers a large area of the island's east coast. For updated warnings, visit: http://www.meteomadagascar.mg/cyclone.

Ava is expected to strengthen to 70 knots (80 mph/130 kph) by Jan. 5 as it travels southward along the east coast of Madagascar over the next 5 days, when it is expected to move south of the island nation on Jan. 9. 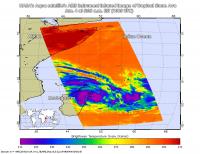