UT Arlington researchers focusing on the Amazon recently found that widespread conversion from rainforest to pastureland has significant effects on microorganism communities that may lead to a reduction in the region's role as a reservoir for greenhouse gas.

The Amazon rainforest is the largest terrestrial reservoir or "sink" for carbon dioxide, a gas that has been linked to climate change. Through photosynthesis, the Amazon absorbs 1.5 billion tons of carbon dioxide from the atmosphere every year in a process that requires input of nitrogen. That nitrogen, for the most part, comes from a process called nitrogen fixation – essentially microbes pulling nitrogen form the air into the soil.

The new paper, featured in the January issue of Applied and Environmental Microbiology, looks for the first time at the reaction of free-living nitrogen-fixing microorganisms called diazotrophs to the deforestation. Jorge Rodrigues, an assistant professor of biology at The University of Texas at Arlington, organized the work. Babur S. Mirza, formerly a postdoctoral fellow in the Rodrigues lab, is the paper's lead author.

"This study shows that although the diversity of diazotrophic microorganisms remains the same with the conversion from forest to pasture, the types of species found are different," said Rodrigues. "Our next step is to measure how the rates of biological nitrogen fixation are influenced by community changes. Because the carbon and nitrogen cycles are so strongly linked, our previous results indicated that changes in carbon dioxide sequestration will occur."

Rodrigues' team gathered samples of soil from the Fazenda Nova Vida site in Rondonia, Brazil, one of three states in the country that accounted for more than 85 percent of deforestation from 1996 to 2005. They analyzed soil from a primary forest, a pasture established in 2004 and a secondary forest that resulted from the abandonment of a pasture in 1999.

The team used DNA analysis, specifically the nifH gene that is characteristic of diazotrophs, to measure the communities in the samples.

Rodrigues said researchers were surprised to find a ten-fold increase in the number of diazotrophic microorganisms in the pasture established in 2004, when compared to the primary forests. They theorize the pasture ecosystems rely on the diazotrophs more for nitrogen because of the continuous grazing from cattle, requiring constant regrowth of grasses.

"We observed a complete shift in the diazotrophic microbial community composition in response to the Amazon rain forest conversion to a pasture," Mirza said. "These differences an be attributed to the shift in the above ground plant community because we did see partial recovery of diazotroph community composition in the secondary forest, which have more plant species as compared to pasture."

Other co-authors on the new paper include Chotima Potisap, a visiting Ph.D. student from Khon Kaen University in Thailand; Klaus Nüsslein, professor of microbiology at the University of Massachusetts; and Brendan J.M. Bohannan, professor at the Institute of Ecology and Evolution, University of Oregon.

The paper is titled "Response of Free-Living Nitrogen Fixing Microorganisms to Land Use Change in the Amazon Rainforest" and is available online here: http://aem.asm.org/content/early/2013/10/21/AEM.02362-13.full.pdf+html.

Despite worries about the effect these changes to the microbial communities may have on the carbon cycle, Rodrigues said there are some encouraging results. After pastures were abandoned and a secondary forest grew, partial restoration of the original diazotrophic communities was achieved, researchers said.

Growth of secondary forest is ongoing for about 50 percent of the abandoned pastures in the Amazon, but more needs to be done to encourage secondary forests and limit deforestation in the first place, Rodrigues said.

"There is still time to recover if we act now," he said.

An Agriculture and Food Research Initiative grant from the U.S. Department of Agriculture supported the work detailed in the paper.

Journal
Applied and Environmental Microbiology
Funder
US Department of Agriculture 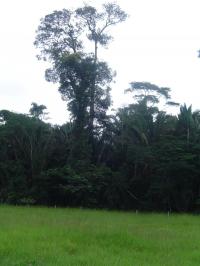