When a plant bends toward the light as it grows, the underlying chemical that regulates that movement?

Depending on the situation, the presence of this hormone can be a signal that kicks DNA transcription into gear, promoting growth and development, or it can keep transcription from happening.

The research was published Aug. 14 in the journal Molecular Cell.

"You can have any cue," said lead researcher Lucia Strader, associate professor of biology in Arts & Sciences and associate director of the Center for Science & Engineering of Living Systems. "Light, temperature, different nutrients ... the plant makes auxin in response to all of these things." What follows as a result of that auxin release can also vary, from stress responses to leaf development to changes in the root system architecture.

Those responses are all results of Auxin Response Factors (ARFs), proteins which bind to DNA in a cell's nucleus to facilitate growth and development in one way, or another.

The question Strader's lab was investigating: how can ARFs do the right thing, in the right place, at the right time while at the same time preventing inappropriate responses?

The answer began with an updated understanding of the fundamental nature of ARFs.

They are always present in a plant, but ARFs are often impotent because they are bound by Aux/IAA repressor proteins, which keep the ARFs inactive, until auxin chemically uncouples them. A new understanding of the structure of the ARFs led to a new understanding about the way they connect.

The change centered on the PB1 domain, on the opposite end of the ARF protein from the DNA binding domain (where the ARF, once in the nucleus of a cell, will bind to DNA during the transcription process).

As opposed to being bound to repressor or ARF proteins in pairs, "ARF PB1 domains are like miniature bar magnets, with a plus side and a minus side, free on two ends to pair with other proteins," Strader said. "There's the potential for them to grow into long chains."

Outliers in the cytoplasm

It turns out that ARF PB1 domain chain formation plays an unexpected role.

While researching ARFs, Samantha Powers, a graduate student in the lab, was tasked with tagging one of the 23 Arabidopsis ARFs as part of her research. The image she came back with was unusual. Instead of finding the ARFs in the nuclei of plant cells, they were showing up in the cytoplasm, the gel-like substance that surrounds the nucleus. "Which is weird," Strader said.

Looking in the literature for studies showing the location of ARFs in plant cells, the team found one. Just one. And it looked much different than what Powers saw in her research: the ARFs were mostly where they "should" be, in the nuclei of the cells, with a couple of outliers in the cytoplasm.

Powers, it turned out, had been looking at ARFs in the plant's mature root, while the study they found had looked at the meristematic root tip, the area where young cells divide.

"The beautiful thing about plants as a developmental model is that in a single individual, at a single time point, you have every stage of development present," Strader said. The youngest cells are at the beginning of the root system and since plant cells don't move, they simply divide upward, building upon each other; the cells get older the farther away they are from the tip.

Powers's finding, then, was a clue: In the younger cells, ARFs were in the nucleus, transcribing mRNA, but in the older cells, they were stuck in the cytoplasm, not doing much of anything. And in the intermediate regions, there was a mix.

Strader discussed these findings at a biophysics seminar, after which Alex Holehouse -- then a PhD student working in the lab of Rohit Pappu, the Edwin H. Murty Professor of Engineering in the McKelvey School of Engineering -- approached her with a specific proposal.

"He said, 'While you were giving the talk, I downloaded the sequences of all 23 ARFs and analyzed them. I have data for you,'" Strader said.

Holehouse is currently a postdoctoral fellow in the Pappu lab and is slated to start his own lab in the Department of Biochemistry & Molecular Biophysics in early 2020. He proposed that the ARFs that Powers and Strader were seeing in the cytoplasm were in fact protein condensates driven, in part by the "intrinsically disordered regions" of ARF proteins, the regions that lie between the DNA binding and the PB1 domains.

Holehouse postulated that the ARF proteins were transitioning from dispersed to condensed states to accumulate in the cytoplasm; similar to the way water molecules condense to form droplets.

"Conventional wisdom says that proteins have to adopt specific three-dimensional shapes to recognize their molecular targets; IDRs are different in that they are shape shifters," Pappu said. "They can adopt different shapes depending on their contexts and these features make them ideal drivers of condensates providing they have the requisite sticky regions.

The IDRs (intrinsically disordered regions) of particular ARFs had all the features of molecules that readily stick to themselves. Coupled with the ability for the ARFs to connect and form repeating structures -- or oligomerize -- via the PB1 domain, ARFs in the older cells condensed into assemblies that ensure that they remain stuck in the cytoplasm.

And when ARFs are stuck in the cytoplasm, they cannot initiate DNA transcription. "It is that simple," Pappu said.

"We think this is a way of keeping that pathway from being active in a certain cell type without turning it off completely," Strader said.

Guided by Holehouse's detective work, Powers went on to mutate certain ARFs so they would all make their way into the nucleus. They found that, as long as the ARFs can make it into the nucleus to bind DNA, when auxin is present, transcription will occur, no matter the cell type.

"It's really exciting because we have shown that forming condensates in the cytoplasm is a way of attenuating auxins," Strader said. "Every cell is responsive to auxin when there is an ARF variant that's constitutively nuclear, whereas unresponsive cells sequester ARFs in their cytoplasm." A constitutively nuclear variant be able to activate genes in all cell types.

"Engineers routinely try to design biomaterials that can form depots within cells so as to control the release of material that gets tied up in the depots," Pappu said. "What is fascinating is the level of control afforded to the localization of ARF proteins by making cytoplasmic depots, the condensates, via sticky IDRs in older cells. The depot making apparatus, comprising of molecules with sticky IDRs can tell older from younger cells. Being able to replicate this type of molecular control to make active matter would be a dream for bioengineers."

The continuing collaboration between the Strader and Pappu labs is focused on adapting plants as model systems to study molecular and cellular processes that are tied to neurodegeneration.

That's because this research shows a strong, positive biological role for protein condensation which, Strader pointed out, is the same process often associated with disease such as Alzheimer's , ALS, and other prion-related disorders.

For plants, this research illustrates how condensation is a mechanism that can prevent them from transcribing genes by keeping transcription factors out of the nucleus in certain contexts, ensuring auxin does the right thing, at the right time, in the right place.

Sticky proteins help plants know when -- and where -- to grow 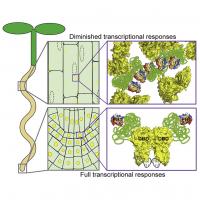