A star like the Sun has an internal driving in the form of a magnetic field that can be seen on the surface as sunspots. Now astrophysicists from the Niels Bohr Institute have observed a distant star in the constellation Andromeda with a different positioning of sunspots and this indicates a magnetic field that is driven by completely different internal dynamics. The results are published in the scientific journal, Nature.

Stars are glowing balls of gas that through atomic processes release energy that is emitted as light and heat. In the interior of the star are charged particles that swirl and spin and thereby create a magnetic field that can burst out onto the surface of the star, where it appears as sunspots. Sunspots are cool areas caused by the strong magnetic fields where the flow of heat is slowed. On our star, the Sun, the sunspots are seen in a belt around the equator, but now scientists have observed a large, distant star where sunspots are located near the poles.

Sunspots at the poles

"What we can observe on the star is that it has a large sunspot at its north pole. We cannot see the south pole, but we can see sunspots at latitudes near the poles and these sunspots are not there at the same time, they are seen alternately on the northern and southern hemispheres. This asymmetry of sunspots indicates that the star's magnetic field is formed in a different way than the way it happens in the Sun," explains astrophysicist Heidi Korhonen, Dark Cosmology Centre at the Niels Bohr Institute at the University of Copenhagen.

The star that has been observed is a massive star that is approximately 16 times the size of the Sun in diameter. It is located180 light years away in the constellation Andromeda. It is much too far away to be able to observe the details on the surface of a star that is only seen as a spot of light that is less than one pixel. Astronomers have previously seen sunspots on Zeta Andromeda using the Doppler method, which means that you observe that light wavelengths of the rotating star. Sunspots are cool areas and by studying the wavelengths you can construct a map of the surface temperature. So far this has been the best way to observe the surface structures of distant stars, but there may be misinterpretations, so there have been doubts about the accuracy concerning the existence of the polar sunspots.

But by using a method where you gather images from several different telescopes that you observe simultaneously, you can get far more details than you could achieve with even with the largest telescopes individually. But it was not easy. It is a method that has been used for decades in the radio waveband field and using the CHARA Array, consisting of six telescopes, it has now become possible to observe the visible and near-infrared light.

"With these new observations, we have many more details and extra high resolution. Our new measurements confirm that there are large sunspots at the poles. We see dark sunspots on the northern visible pole, while the observations reveal that the lower latitudes are areas with sunspots that do not last, but appear and disappear again with an asymmetrical distribution on the surface of the star and this was surprising," says Heidi Korhonen, who is an expert on sunspots.

But why is the location of the sunspots different than those we know from the Sun?

Heidi Korhonen explains that it is a very different star than the Sun. It is a binary star, that is, two stars orbiting each other. This causes the stars to rotate more quickly. The Zeta Andromeda star, which is the larger of the two stars, rotates at 40 km per second. The Sun rotates at 2 km per second.

"It is the rapid rotation that creates a different and very strong magnetic field. The strong magnetic field gives a more complicated dynamo effect that resembles what you see at the stage where a new star is being created. Here we are seeing the same effect in an old active star that is in its final stage," explains Heidi Korhonen.

On the Sun, the sunspots appear and disappear on a regular basis and the number increases periodically approximately every 11 years. The magnetic field that creates the sunspots can also trigger large, explosive discharges of plasma, causing solar storms to hit the Earth. These storms result in very strong northern lights and can also cause problems for orbiting satellites and the power grid on Earth.

Star with different internal driving force than the sun 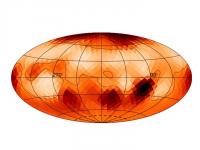