The Salk team uncovered two gene-regulating molecules that alter cell signaling within tumor cells to survive and subvert the body's normal immune response, according to a September 18, 2017, paper in Nature Cell Biology. The discovery could one day point to a new target for cancer treatment in various types of cancer.

"The immunological pressure occurring during tumor progression might be harmful for the tumor to prosper," says Salk Professor Juan Carlos Izpisua Belmonte, senior author of the work and holder of the Roger Guillemin Chair. "However, the cancer cells find a way to evade such a condition by restraining the anti-tumor immune response."

Cancerous tumors often grow so fast that they use up their available blood supply, creating a low-oxygen environment called hypoxia. Cells normally start to self-destruct under hypoxia, but in some tumors, the microenvironment surrounding hypoxic tumor tissue has been found to help shield the tumor.

"Our findings actually indicate how cancer cells respond to a changing microenvironment and suppress anti-tumor immunity through intrinsic signaling," says Izpisua Belmonte. The answer was through microRNAs.

MicroRNAs--small, noncoding RNA molecules that regulate genes by silencing RNA--have increasingly been implicated in tumor survival and progression. To better understand the connection between microRNAs and tumor survival, the researchers screened different tumor types for altered levels of microRNAs. They identified two microRNAs--miR25 and miR93-- whose levels increased in hypoxic tumors.

The team then measured levels of those two microRNAs in the tumors of 148 cancer patients and found that tumors with high levels of miR25 and miR93 led to a worse prognosis in patients compared to tumors with lower levels. The reverse was true for another molecule called cGAS: the lower the level of cGAS in a tumor, the worse the prognosis for the patient.

Previous research has shown that cGAS acts as an alarm for the immune system by detecting mitochondrial DNA floating around the cell--a sign of tissue damage--and activating the body's immune response.

"Given these results, we wondered if these two microRNA molecules, miR25 and miR93, could be lowering cGAS levels to create a protective immunity shield for the tumor," says Min-Zu (Michael) Wu, first author of the paper and a research associate in Salk's Gene Expression Laboratory.

That is exactly what the team confirmed with further experiments. Using mouse models and tissue samples, the researchers found that a low-oxygen (hypoxia) state triggered miR25 and miR93 to set off a chain of cell signaling that ultimately lowered cGAS levels. If the researchers inhibited miR25 and miR93 in tumor cells, then cGAS levels remained high in low-oxygen (hypoxic) tumors.

Identifying miR25 and miR93 may help researchers pinpoint a good target to try to boost cGAS levels and block tumor evasion of the immune response. However, the team says directly targeting microRNA in treatment can be tricky. Targeting the intermediate players in the signaling between the two microRNAs and cGAS may be easier.

"To follow up this study, we're now investigating the different immune cells that can contribute to cancer anti-tumor immunity," adds Wu. 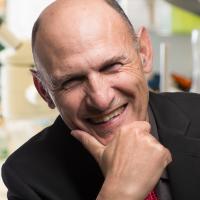