In any given second, thousands of immune cells are poking holes in your blood vessels as they travel out of the blood stream to survey your organs for problems or join the fight against a pathogen. Despite the constant assault, the damage is negligible, and in a study, appearing January 17 in Cell Reports, researchers may reveal why: as immune cells squeeze their nuclei through blood vessel walls, the force breaks thin filaments that make up the cytoskeleton -- the scaffold proteins that give a cell its shape -- of individual endothelial cells that hold the wall together. These filaments are known to quickly be replaced.

"Initially we thought that immune cells just dissolve the entire cytoskeleton of these endothelial cells and then reseal everything, but we didn't find any sign of massive destruction," says senior author Ronen Alon, an immunologist and stem cell researcher at the Weizmann Institute of Science in Israel. "Following fluorescence imaging, electron microscopy, and ultrastructural analysis, we found a subset of very tiny, interlacing filaments that crisscross throughout thicker elastic fibers that comprise the individual blood vessel wall cells, and we think that these tiny filaments are the ones that break during leukocyte squeezing and then rapidly reassemble."

In general, the thin blood vessel walls crossed by infiltrating immune cells at most tissues are effective at keeping blood and circulating immune cells in and anything that doesn't belong out. When subsets of immune cells, white blood cells (leukocytes), encounter specific signals on blood vessels at nearby sites of infection or inflammation, these chemicals guide the immune cells to stop and exit the blood vessels. Shortly after arresting, leukocytes use additional chemoattractive signals to crawl, protrude and squeeze their bodies, generating pores or gaps with a diameter of 4 to 5 microns, which is about the diameter of their bulky nuclei.

The long-standing question has been whether these openings form because the blood vessel cells are contracting like small muscles in response to their interactions with arrested and crawling leukocytes. The Alon study, which was based on both in vitro and animal models, suggests that the openings in fact involve an active process imposed by the nuclei of the squeezing leukocytes: these nuclei are pushed forward by the leukocyte's own motors bending and snapping the various filaments that comprise the cytoskeleton of the endothelial cells breached by the squeezing leukocyte.

"We poisoned the contractile machinery of the blood vessel cells and immune cells could still normally squeeze through, generating large gaps and pores," says Alon. "This was a big surprise. We then used other biochemical manipulations, which have led to the conclusion that it is the breakage of the thin filaments of endothelial cells that open gaps in response to the squeezed nucleus of each immune cell acting like a drill."

There are more questions about the physics of how this is happening that need to be explored. The research is also relevant to cancer physiology, as tumor cells are much less efficient than leukocytes in their ability to move their nucleus forward and squeeze it through blood vessels at sites of metastasis.

This research was supported by the Israel Science Foundation, the Flight Attendant Medical Research Institute Foundation (FAMRI), U.S.A., and the Minerva Foundation, Germany. 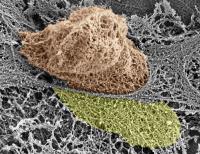 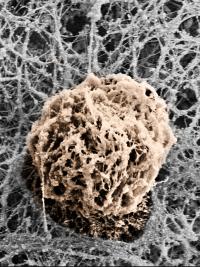