A new study says that many of the ice shelves ringing Antarctica could be vulnerable to quick destruction if rising temperatures drive melt water into the numerous fractures that currently penetrate their surfaces. The shelves help slow interior glaciers' slide toward the ocean, so if they were to fail, sea levels around the world could surge rapidly as a result. The study appears this week in the leading journal Nature.

Ice shelves are giant tongues of ice floating on the ocean around the edges of the continent. The vast land-bound glaciers behind them are constantly pushing seaward. But because many shelves are largely confined within expansive bays and gulfs, they are compressed from the sides and slow the glaciers' march--somewhat like a person in a narrow hallway bracing their arms against the walls to slow someone trying to push past them. But ice shelves experience a competing stress: they stretch out as they approach the ocean. Satellite observations show that, as a result, they rip apart; most are raked with numerous long fractures perpendicular to the direction of stretching. Fractures that form at the surface can be tens of meters deep; others, forming from the bottom, can penetrate the ice hundreds of meters upward. Some fractures are hundreds of meters wide.

Currently, most of the shelves are frozen year round, and stable. But scientists project that widespread warming could occur later in the century. And, existing research has shown that even subtle temperature swings can spur widespread melting. This could send melt water surging into the surface fractures. Such surges would potentially cause hydrofracturing-a process in which liquid water, heavier than ice, would violently force the fractures to zip open, and cause the shelf to rapidly disintegrate The new study estimates that 50 to 70 percent of the areas of the ice shelves buttressing the glaciers are vulnerable to such processes.

"It's not just about melting, but where it's melting," said lead author Ching-Yao Lai, a postdoctoral researcher at Columbia University's Lamont-Doherty Earth Observatory.

"The ice shelves-that's the weak spot, where the atmosphere, the ice and ocean interact," said study coauthor Jonathan Kingslake, a glaciologist at Lamont-Doherty. "If they fill up with melt water, things can happen very quickly after that, and there could be major consequences for sea levels."

Hydrofracturing has already occurred in a few places. Parts of the Larsen Ice Shelf, which had been stable for at least 10,000 years, disintegrated within just days in 1995 and 2002. This was followed by the partial breakup of the Wilkins Ice Shelf in 2008 and 2009. The main agreed-upon causes: hydrofracturing. The Larsen and Wilkins comprise some of the northernmost ice on the continent, and so have been the first to suffer under rising temperatures and seasonal melting.

The new study follows a 2017 paper led by Kingslake showing that seasonal ponds and streams on the ice surface are far more common across Antarctica than previously believed; some reach within 375 miles of the South Pole. But most cataloged features are in places not subject to hydrofracturing. The new study shows that, so far, only about 0.6 percent of East Antarctic ice shelves that provide buttressing experience melt-water ponding, making them vulnerable. A much larger percentage would potentially be endangered, if warming takes hold.

In collaboration with Cameron Chen, a researcher from Google, Lai trained a machine-learning model to identify ice-shelf fracture locations across Antarctica, to produce the first continent-wide map of such features. Although most fractures now contain no liquid water, the scientists considered future cases in which melt water might fully fill the surface fractures. This allowed them to predict which parts of the shelves would be vulnerable to hydrofracturing, when factoring in the competing forces of compression from the sides, and stretching of the ice from back to front.

They calculated that inflow of liquid into the existing fractures could potentially exert enough force to cause widespread hydrofracturing across 50 to 70 percent of the ice-shelf areas that provide buttressing. The main exceptions were smaller, solider areas of ice closest to land, which experience less stress from stretching. The end portions of the shelves, mostly surrounded by open ocean, are also vulnerable, but floating freely as they do, those do not help hold back the glaciers.

While the study flashes a warning, the researchers say they cannot predict the ice shelves' behavior with any exactitude. "How fast melt water would form and fill in those cracks is the first question," said Kingslake. He said the worst-case scenario would be that "lots of places will be covered by lots and lots of water by the end of the century." But projections vary widely, depending on which models scientists use, and how vigorously humanity cuts greenhouse gases, or not. The second question is whether particular locations will undergo hydrofracturing, he said. The third question: whether the process would run away, causing the shelf to undergo explosive Larsen-type disintegration.

Theodore Scambos, a leading Antarctic glaciologist and the National Snow and Ice Data Center, said the paper "does a great job of pointing to areas where one can say, 'If it floods with melt here, it's likely to break up the shelf." He added that it "has huge implications for sea level" if summer temperatures along the coasts rise.

"Eventually, all the ice shelves could be covered by melt water," said Lai. "But we don't have a time frame, and there are a lot of big questions left."

The study was also coauthored by Martin Wearing of the University of Edinburgh; Pierre Gentine, Harold Li and Julian Spergel of Columbia; and J. Melchior van Wessem of Utrecht University.

The paper, 'Vulnerability of Antarctica's ice shelves to meltwater-driven fracture,' is available from the Nature press office: press@nature.com 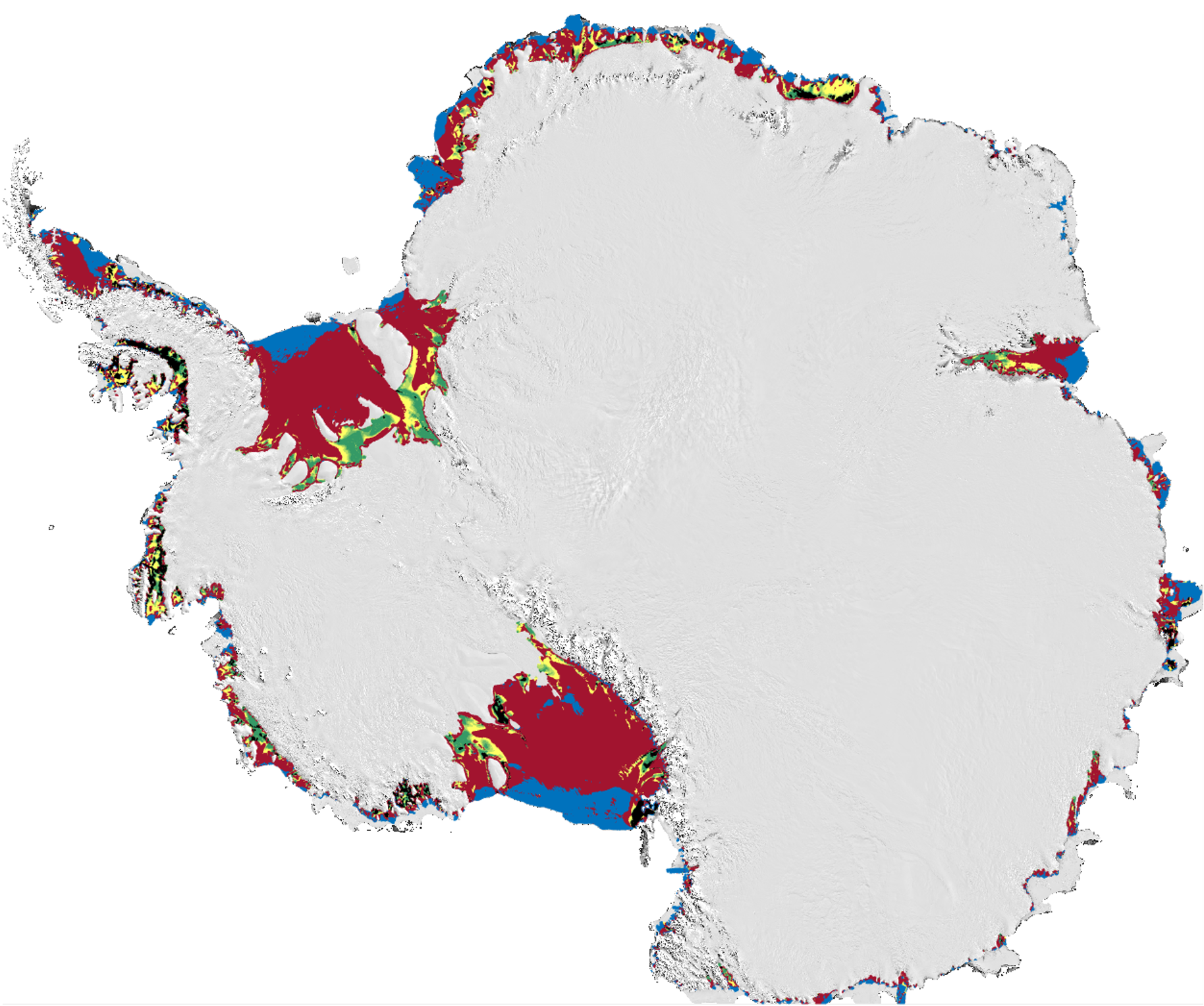