Gamma-Ray Burst (GRB), generated in distant galaxies, is the most energetic astronomical event in the Universe. The physical origins of GRBs are still not well understood. From two widely-used theoretical models, a GRB is thought to be originated from the collapse of a massive star or the collision of two stellar objects. The burst time of a GRB is short, from ten milliseconds to several thousand seconds, making GRB hard to be caught with current observing techniques. After the burst, the ejected material will hit and interact with the interstellar gas, producing shocks which create the gradually fading emission, called 'Afterglow', which can be luminous across the whole electromagnetic spectrum. Multi-band observations of GRB afterglows provide unique opportunities for studying their progenitor and pre-burst medium. A afterglow has a longer duration time than the prompt emission, the longest afterglow at X band can be up to 6 months, and the duration of an afterglow increases when observed at radio wavelengths.

Up to now, Very Long Baseline Interferometry (VLBI) is the highest-resolution imaging technique in astronomical observations. Since GRBs are distant objects and their emission features are very compact, VLBI becomes the only approach enabling to probe the structural changes of their afterglows. By utilizing observations from VLBI network, scientists can accurately measure the scale, proper motion and intensity of an afterglow, and obtain important constraints on theoretical models. For example, in the study of a famous double neutron star merger event GW170817, two scenarios were debated - whether it forms structured jet that can break out of the circumstellar medium or the jet is choked and trapped by the external medium - until VLBI observations provided strong evidence of a successful jet , supporting the former scenario.

The target source of this experiment, GRB190114C, is a special case among the discovered GRBs ever as it is the only GRB that was detected by ground-based Cherenkov telescopes and has high-energy emission (>100 GeV), which makes GRB190114C a unique candidate for investigating the energy mechanisms of high-energy GRBs [1]. It's afterglow was detected by multi-band observations from X-ray to radio, which makes the target more particular.

An international team led by Prof. Tao An from Shanghai Astronomical Observatory proposed to observe GRB190114C with East-Asia VLBI network (EAVN, [2]) just after it was discovered. Its afterglow was observed on three epochs corresponding to 6, 15 and 32 days after the burst. After careful analysis of the correlated data, the team eventually came to a conclusion that no significant signal above 5-sigma level is detected in all the three observations. The non-detection results place strong upper limits to constrain parameters extracted from different theoretical models of GRBs.

According to the current theories and widely accepted GRB models, two different models of interstellar medium density distribution were considered to parameterize the energy distributions [Fig. 1, Wind-like medium (left) and uniform ISM medium (right)]. By applying the results from the observations, allowed parameter values are constrained. Figure 2 shows the direct comparison between the published predictions and observation measurements (yellow spots) in a light curve view, from which we can find good consistency between observed upper limits and theoretical predictions.

It is worth mentioning that this is the first EAVN observation of transients. To better probe the weak signal of GRBs in radio bands, phase-referencing mode was used during the observations. The current experiment not only becomes one of the contributions of the multi-wavelengths studies of GRB190114C, but also represents a significant step forward of the EAVN capacities on observing weak radio sources and transients. 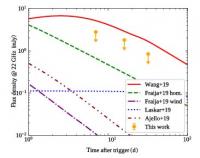