HANOVER, N.H. - March 29, 2016 - For many immigrants in this country, anti-immigration rhetoric is not just something that you hear on the campaign trail but a reality. In fact, about a third of U.S. states, have had restrictive laws directed at undocumented immigrants in place since the late 2000s. As a result, many Latinos have become averse to moving to these states according to a new University of Washington - Dartmouth study just published in the Annals of the American Association of Geographers. (A copy of the study is available upon request).

To examine the effects of state-scale immigration enforcement on internal Latino migration patterns, the study uses data from the decennial census in 2000 and from the American Community Survey for 2005-2010. Adapting earlier research on Latino migration by Arjen Leerkes, James Bachmeier and Mark Leach, the research classifies states into two groups: "hostile states," which have enacted laws that are restrictive in some way (i.e. Ariz., Ark., Colo., Conn., Fla., Ga., Md., Miss., Mo., N.C., Nev., Okla., Ore., S.C., Tenn., Texas, Utah, Va.) and all others ("non-hostile states)."

Examples of hostile state laws currently in place are universal employment verification, which makes it hard for immigrants in the U.S. without permission to obtain the authorization to work, and mandatory legal status checks for state licensing services, which makes it more difficult for the unauthorized to obtain driver's licenses or access other state services. One of the most extreme examples of hostile state laws was Arizona's SB1070 in 2010, which attempted to criminalize the presence of unauthorized immigrants in the state. The U.S. Supreme Court, however, vacated most of the provisions in SB1070 and that of copycat laws passed by other states in June 2012.

"Like almost all immigration legislation, these state-scale statutes have had intended and unintended consequences. They have reduced the attractiveness of these states to the unauthorized, but they have had a serious dampening effect on the migration patterns of Latinos with rights associated with citizenship, " said study co-author, Richard Wright, Professor of Geography at Dartmouth College.

The state-scale immigration policies deterred internal migration for all Latinos. Latinos with citizenship, who avoided hostile states, may have been trying to minimize the potential for elevated levels of discrimination or if they are part of a mixed-legal status family, they may not have wanted to put their family in a more vulnerable environment.

The geographic pattern of states with immigration policies aimed at making life difficult for the unauthorized from the late 2000s still applies today. Latinos however, are not the only marginalized group in U.S. history for which migration has been impacted by state policies, as a similar effect took place with the Great Migration of African Americans in the early and middle decades of the 20th century during which blacks moved to the north and the west to escape Jim Crow Laws and the racial violence in the south. The Latino migration patterns in the study are unlikely to be reversed unless states change their policies.

Available to comment on the study are co-authors: Mark Ellis, Professor of Geography and Director of the Northwest Federal Statistics Research Data Center at the University of Washington at: ellism@uw.edu; and Richard Wright, Professor of Geography, Latin American, Latino, and Caribbean Studies, and the Orvil E. Dryfoos Chair of Public Affairs at Dartmouth at: richard.a.wright@dartmouth.edu. Matthew Townley, a graduate student in the department of Geography at the University of Washington, also served as one of co-authors of the study.

Annals of the American Association of Geographers

Journal
Annals of the American Association of Geographers 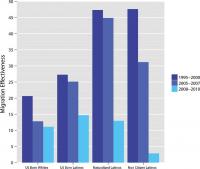