Some types of cancer cannot be treated with classical chemotherapy. Scientists from Inserm, CNRS, Sorbonne University, PSL university, University Grenoble Alpes and ESRF, the European Synchrotron, are working on a metallorganic molecule as an antitumor drug. Their research has given thorough insights into its mechanism in attacking cancer cells. This study is published in Angewandte Chemie.

Triple-negative breast cancer, which represents 10-20% of breast cancers, is not fuelled by hormones. In fact, it tests negative for estrogen and progesterone receptors and excess HER2 protein. This means that it does not respond to hormonal therapy and antibody medicines. Given that it is more aggressive and often has a higher grade than other types of breast cancer, the scientific community is relentlessly trying to find a treatment.

A team from Inserm, the CNRS, Sorbonne University, PSL university, the University Grenoble Alpes and the ESRF have joined forces to study the path that metallorganic molecules or metallocifens, derivatives of the widely-used drug tamoxifen, follow to reach cancerous cells. These metallodrugs were developed by Professor G.Jaouen and his group at Sorbonne University and PSL University. They have demonstrated their broad spectrum of efficacy and their potential to significantly overcome drug resistance.

"We know this molecule works because extensive tests have been already carried out, but we don't know how it manages to kill the cancer cell. That is why we want to quantify and localise the drug inside the cell, to understand its efficiency", explains Sylvain Bohic, scientist at the Inserm and main author of the study.

The scientists used the beamline ID16A at the ESRF for their investigations. State-of-the-art synchrotron imaging brought unique insight into the intracellular distribution of the metallocifen, which they could track down with a resolution of 35 nanometres. "The investigations are going on for a few years and finally benefit of the latest capabilities of the instrument in terms of 2D and 3D cryo X-ray fluorescence approaches", adds Peter Cloetens, in charge of ID16A.

For the first time, they showed how the molecule penetrates the membrane of the cancerous cell in an extremely easy manner, due to its lipophilic nature and target an essential cellular organelle the endoplasmic reticulum a large organelle made of membranous sheets and tubules that begin near the nucleus and extend across the cell. Then, it oxidises and attacks different parts of the cell at the same time, leading to efficient anticancer activity. "Think of it as if the metallorganic molecule starts many fires in different places in the cancer cell, until the tumoral cell can't deal with it anymore and it dies", explains Bohic.

The results are promising because this new family of metallodrugs, which acts on multiple targets, could one day become an alternative of classical chemotherapy to overcome drug resistance while holding down costs. Cisplatin, another metal-based medication widely used for cancer treatment, damages the DNA as a primary target inside the cell, and whilst it is very effective, strong side-effects exist and cancer cells developed efficient mechanisms of resistance to this chemotherapy. Indeed, triple negative breast cancer and other cancers, as well as relapsing cancers, are often cisplatin-resistant.

"This study is a contribution to the understanding of alternative mechanisms from chemotherapy to heal cancer. We are at an early stage of research, so clinical trials have not begun yet, but so far it is promising", says Prof. G. Jaouen. The next step is to find out how this molecule acts in healthy cells and to study toxicology.

Revealing the path of a metallodrug in a breast cancer cell 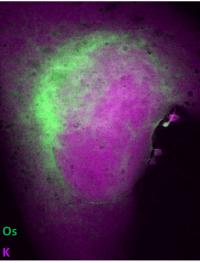