Using fragments of circulating tumor DNA in blood, University of California San Diego School of Medicine researchers were able to identify theoretically targetable genetic alterations in 66 percent of patients with cancer of unknown primary (CUP), a rare disease with seven to 12 cases per 100,000 people each year.

In order to plan treatment for cancer in general, physicians first attempt to pinpoint the primary cancer -- where the tumor first developed. In CUP, despite its spread throughout the body, the origin remains unknown, making treatment more difficult. The current standard of care is platinum-based combination chemotherapies with a median survival time of six to eight months.

In a study published in the journal Cancer Research on August 15, researchers report that by sequencing circulating tumor DNA (ctDNA) derived from blood samples in 442 patients with CUP, they were able to identify at least one genetic alteration linked to cancer in 290 -- 66 percent -- of patients. Researchers used a screening test developed by Guardant Health that evaluates up to 70 genes. Based on known carcinogenic mutations, 99.7 percent of the 290 patients who had detectable tumor DNA in their bloodstream had genomic alterations that could hypothetically be targeted using existing FDA-approved drugs (as off-label use) or with therapies currently under investigation in clinical trials.

"By definition, CUP does not have a definite anatomical diagnosis, but we believe genomics is the diagnosis," said Razelle Kurzrock, MD, director of the Center for Personalized Cancer Therapy at Moores Cancer Center at UC San Diego Health and senior author. "Cancer is not simple and CUP makes finding the right therapy even more difficult. There are multiple genes and abnormalities involved in different areas of the body. Our research is the first to show that evaluating circulating tumor DNA from a tube of blood is possible in patients with CUP and that most patients harbor unique and targetable alterations."

A blood or "liquid biopsy" is a diagnostic tool based on the idea that critical genetic information about the state of disease can be found in blood or other fluids. One vial of blood could be used to detect the onset of disease, monitor its progression and measure its retreat less invasively than a tissue biopsy.

"Another advantage of the liquid biopsy is that the location of the cancer does not matter," said Shumei Kato, MD, assistant professor of medicine at UC San Diego School of Medicine and first author. "With a blood sample, we can analyze the DNA of tumors throughout the body to find targetable alterations. With tissue biopsies, we can only see genomic changes that are in that one site and that may not be the same as what is in different sites not biopsied, such as the lung or bone."

Liquid biopsies are relatively simple to get and can be obtained regularly to monitor changes over time, as was the case with a 60-year-old woman with CUP. Her case, which was evaluated by Brian Leyland-Jones, MB, BS, PhD and co-author with colleagues at Avera Cancer Institute, was described in the study to show the changes observed in ctDNA over the course of her treatment.

"What we saw was that the patient was responding to treatment, but the cancer had emerging new mutations," said Kurzrock. "What's new here is that we can do the same evaluation through a blood test that we previously could only do with a tissue sample. You will see these changes with a simple blood test and it is easy to repeat blood tests, but hard to repeat tissue biopsies."

The study also reported the case of an 82-year-old man who was prescribed a checkpoint inhibitor immunotherapy as part of his treatment because of a mismatch repair gene anomaly that is typically observed in less than two percent of patients. He showed a partial response within eight weeks and blood biopsies showed the tumor DNA disappearing.

"We can see that each patient has different mutations in their tumor DNA, which means that treatment plans cannot be a one-size-fits-all approach; a personalized approach is needed," said Kato.

Kurzrock is already using liquid biopsy technology in the Profile Related Evidence Determining Individualized Cancer Therapy (PREDICT) clinical trial -- a project focusing on the outcome of patients who have genomic testing performed on their tumors and are treated with targeted therapy.

The authors suggest that a liquid biopsy approach should be further investigated in next-generation clinical trials focusing on CUP.

Disclosure: Razelle Kurzrock receives consultant fees from X-biotech and from Actuate Therapeutics, as well as research funds from Genentech, Pfizer, Sequenom, Guardant, Foundation Medicine and Merck Serono, and has an ownership interest in Novena Inc. and CureMatch Inc. 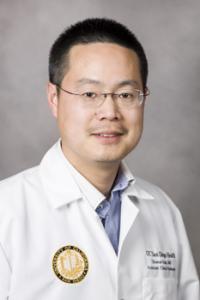