NASA's Aqua satellite provided a look at water vapor in the Atlantic Ocean's Sub-Tropical Storm Ernesto and found the storm looking somewhat "patchy." NASA's GPM satellite provided an earlier look at Ernesto's rainfall and cloud heights. Ernesto is on track to visit the United Kingdom by the end of the week.

Analyzing Rainfall in the Storm

When Sub-Tropical Storm Ernesto was still a depression, Tropical Depression 5, the GPM or Global Precipitation Measurement mission core observatory satellite passed above the western side of newly formed storm on Aug. 15, 2018, at 6:46 a.m. EDT (1046 UTC). The GPM's Microwave Imager (GMI) and Dual-Frequency Precipitation Radar (DPR) instruments revealed that most of the rainfall within the subtropical depression away from the middle of the low level center of circulation. The heaviest rainfall was measured by GPM's DPR in a large feeder band that was spiraling into the southern side of the system. Powerful convective thunderstorms in that area were measured dropping rain at a rate of over 101 mm (about 4 inches) per hour. GPM is a joint mission between NASA and the Japan Aerospace Exploration Agency, JAXA.

Looking at the Storm in 3D

At NASA's Goddard Space Flight Center in Greenbelt, Maryland, GPM's radar data (DPR Ku Band) were used to create a 3D view from the East of the subtropical depression 5. DPR's scans were used to show the precipitation structure of storm tops within subtropical depression 5. DPR found that storm tops were reaching heights above 11 km (6.8 miles) in convective storms located southeast of the system's center of circulation. Storm top height estimates over a larger area than the GPM's radar swath were made possible by blending measurements from DPR with cloud top heights based on the GOES-East satellite's infrared temperatures.

What Water Vapor Revealed in Ernesto

Water vapor analysis of tropical cyclones tells forecasters how much potential a storm has to develop. Water vapor releases latent heat as it condenses into liquid. That liquid becomes clouds and thunderstorms that make up a tropical cyclone. NASA's Aqua satellite passed over Ernesto on Aug. 16 at 12:15 a.m. EDT (0415 UTC) and the Moderate Resolution Imaging Spectroradiometer or MODIS instrument aboard found patches of convection in curved bands around the center. The circulation of the system appears somewhat elongated from north to south, and dry air is wrapping into the western portion of the system.

At 5 a.m. EDT (0900 UTC), the center of Subtropical Storm Ernesto was located near 40.8 degrees north latitude and 44.1 degrees west longitude. The storm is moving toward the north-northeast near 13 mph (20 kph). A significantly faster northeastward motion is expected during the next couple of days. Maximum sustained winds are near 40 mph (65 kph) with higher gusts. Little change in strength is forecast during the next couple of days.

The National Hurricane Center forecaster Cangialosi noted in the 5 a.m. EDT update on Aug. 16, "The subtropical storm has a limited amount of time to strengthen as it will remain over marginally warm waters and in a low wind shear environment for only another 12 hours. After that time, the cyclone is expected to cross over a sharp SST gradient and move into an environment of higher shear. These conditions should cause Ernesto to lose its tropical characteristics in about 24 hours, when the sea surface temperatures beneath the cyclone become colder."

Ernesto is expected to become a post-tropical cyclone Thursday night or early Friday, Aug. 18 and merge with a frontal zone near Ireland and the United Kingdom on Saturday, Aug. 19. 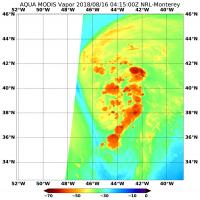