MONTREAL - Brain cancer patients may live longer thanks to a new cancer-detection method developed by researchers at the Montreal Neurological Institute and Hospital - The Neuro, at McGill University and the MUHC, and Polytechnique Montréal. The collaborative team has created a powerful new intraoperative probe for detecting cancer cells. The hand-held Raman spectroscopy probe enables surgeons, for the first time, to accurately detect virtually all invasive brain cancer cells in real time during surgery. The probe is superior to existing technology and could set a new standard for successful brain cancer surgery.

Designed and developed in partnership with Dr. Frédéric Leblond, Professor in Engineering Physics at Polytechnique Montréal, and co-senior author of the study, the probe technique uses laser technology to measure light scattered from molecules. "The emitted light provides a spectroscopic signal that can be interpreted to provide specific information about the molecular makeup of the interrogated tissue," says Dr. Leblond. "The Raman spectroscopy probe has a greater than 92% accuracy in identifying cancer cells that have invaded into normal brain."

In order to show that the use of this system improves patient outcomes, a clinical trial at the Montreal Neurological Institute and Hospital will be launched for patients with newly diagnosed and recurrent glioblastoma. If positive, this portable intraoperative Raman Spectroscopy probe will improve brain cancer surgeries and in turn extend survival times for brain cancer patients.

The Montreal Neurological Institute and Hospital - The Neuro

The Neuro is an academic medical centre dedicated to neuroscience. The Neuro is a research and teaching institute of McGill University and at the centre of the neuroscience mission of the McGill University Health Centre. The eminent neurosurgeon Wilder Penfield founded The Neuro in 1934. Since then, The Neuro has achieved international renown for its integration of research, outstanding patient care and advanced training. The Neuro has a world-class staff in cellular and molecular neuroscience, brain imaging, cognitive neuroscience, as well as in the study and treatment of brain tumours, epilepsy, multiple sclerosis and neuromuscular disorders. For more information, please visit http://www.mni.mcgill.ca

Founded in 1873, Polytechnique Montréal is one of Canada's leading engineering teaching and research institutions. It is the largest engineering university in Québec for the size of its graduate student body and the scope of its research activities. With over 43,000 graduates, Polytechnique Montréal has educated nearly one-quarter of the current members of the Ordre des ingénieurs du Québec. Polytechnique provides training in 15 engineering specialties, has 265 professors and more than 8,000 students. It has an annual operating budget of over $200 million, including an $80-million research budget.

More information, including a copy of the paper, can be found online at the Science Translational Medicine press package at http://www.eurekalert.org/jrnls/scitransmed. You will need your user ID and password to access this information. 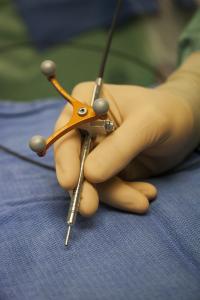