Post-tropical storm Norbert may have been centered a couple of hundred miles off the northwestern coast of Mexico's Baja California, but the flow of warm, moist air that spun around it generated drenching thunderstorms over Arizona. NASA's TRMM satellite saw Norbert's remnants and those Arizona thunderstorms dropping rainfall at over 2 inches per hour.

This simulated flyby of NASA's TRMM satellite on Sept. 8 saw rain falling at a rate of over 62 mm (2.4 inches) per hour in some downpours over Arizona. Some thunderstorm tops reached heights of 13.5 km (about 8.4 miles).

TRMM showed only a small amount of light to moderate rainfall was located around Norbert's center of circulation. However, the moisture moving in a huge counterclockwise circulation around Norbert's remnants was transported almost 1,000 miles away where it generated thunderstorms over Arizona. The TRMM image showed very heavy rainfall was being produced over the southwestern United States, including Arizona, southern California and southern Nevada.

Data from TRMM's Precipitation Radar (PR) instrument were used to create a 3-D image at NASA's Goddard Space Flight Center in Greenbelt, Maryland. The 3-D image showed that some showers located to the west of Norbert's center of circulation weren't very high.

The TRMM satellite flew over the southwestern United States again on September 8 at 1205 UTC (5:05 a.m. PDT). At that time a cluster of intense thunderstorms was found in Arizona directly below the satellite. Rain was measured by the TRMM Precipitation Radar (PR) instrument falling at a rate of over 62 mm (2.4 inches) per hour in some downpours.

According to the National Weather Service, 3.29 inches of rain fell at the Phoenix airport breaking the day's record.

For over sixteen years the TRMM's Precipitation Radar (PR) has been providing three dimensional vertical profiles of precipitation from the surface of the earth to heights of about 12 miles (20 kilometers). The 3-D view showed that some thunderstorm tops reached heights of 13.5 km (about 8.4 miles).

On September 8, the moisture spreading northeastward from tropical storm Norbert caused flooding over inland areas of southern California. By September 9, that moisture generated the strong thunderstorms over Arizona that created widespread flooding led the Governor to declare a state of emergency in the state. 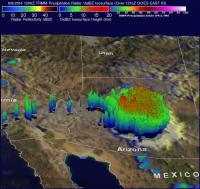 TRMM Image of Norbert over Arizona