Crowdsourced science helped predict the path of a deadly plant disease over a six-year period, demonstrating the contributions that trained citizen scientists can make in large-scale geographic tracking projects. That's the conclusion of a study of sudden oak death monitoring in California, published today in Frontiers in Ecology and the Environment.

"Sudden oak death is the Ebola of the plant world, the most serious disease threat to nonagricultural plants," says lead author Ross Meentemeyer, director of the Center for Geospatial Analytics at North Carolina State University. The disease, which has killed millions of oak and tanoak trees in California and Oregon, can infect more than 100 susceptible host plants and can spread from nursery stock to residential landscapes.

Starting in 2008, University of California, Berkeley researchers expanded their sudden oak death monitoring efforts exponentially, thanks to 1,600 trained volunteers who collected leaf samples from trees in metropolitan and urban-wildland areas.

"We were able to get data from backyards in the Bay Area, along with other undersampled locations," says Meentemeyer, who specializes in geographic information system analysis. "That data was used to develop accurate computer models for the disease's spread, showing that properly trained and educated citizen scientists can collect data that's just as reliable as that of professionals."

The crowdsource approach could be adopted for other large-scale research projects, from tracking wildlife populations to fighting human disease outbreaks.

Accurate predictions about sudden oak death's spread allowed scientists to target treatments to the most vulnerable areas, says Matteo Garbelotto, a UC Berkeley extension specialist and adjunct professor who directs the Forest Pathology and Mycology Laboratory. Follow-up evaluation showed that trained citizen scientists were as effective as experts in identifying and collecting diseased tree leaves, whether or not they reported having a professional background in science.

"To answer many science questions, we need the efforts of a large number of people - and the general public can help," says Sam Scheiner, National Science Foundation director for the NSF-NIH-USDA Ecology and Evolution of Infectious Diseases Program, which funded the research. "This study shows that asking local residents to report on the location of outbreaks of sudden oak death can provide critical information. The result is a better understanding of the spread of this serious plant disease."

Published: May 1, 2015, in Frontiers in Ecology and the Environment

Abstract: Engaging citizen scientists is becoming an increasingly popular technique for collecting ecological data while also creating an avenue for outreach and public support for research. Here we demonstrate a unique opportunity where citizen scientists have played a key role in the spatial prediction of an emerging infectious disease. The yearly citizen science program called "SOD (sudden oak death) Blitz" engages and educates volunteers in detecting the causal pathogen during peak windows of seasonal disease expression. We used these data - many of which were collected from under-sampled urban ecosystems - to develop predictive maps of disease risk and inform where stakeholders should prioritize management efforts. We found that continuing the SOD Blitz program over six consecutive years improved our understanding of disease dynamics and increased the accuracy of our predictive models. We also found that self-identified non-professionals were just as capable of detecting the disease as professionals. Our results indicate substantial promise for using long-term citizen science to predict the risk of emerging infectious plant diseases in urban ecosystems.

Journal
Frontiers in Ecology and the Environment
Funder
US Forest Service, , 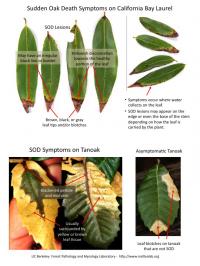