When NASA astronaut Jessica Meir recently slipped her hands into the Life Sciences Glovebox on the International Space Station to conduct a new investigation on heart tissues, she brought a lengthy scientific collaboration full circle.

Before Meir became an astronaut in 2013 and flew to the space station in July 2019, she had extensive experience with biological research. In 1999, during her final undergraduate year at Brown University, she connected with PhD student Peter Lee. Meir and Lee worked in the same lab, and Lee selected Meir for a team that studied suturing in microgravity as part of what was NASA's Reduced Gravity Student Flight Opportunities, now Microgravity University. A graduate of the master's program at the then relatively new International Space University in France, he encouraged Meir to attend as well; she earned a master's there before completing a doctorate at Scripps Institution of Oceanography (UCSD).

Now, Meir is working with Lee once again, this time from space. Currently an assistant professor of surgery in the cardiac division at Ohio State University Wexner Medical Center, Lee is a coinvestigator on the Engineered Heart Tissues experiment that Meir conducted in the glovebox aboard station.

"Peter was instrumental in fostering my dream of becoming an astronaut," Meir says. "He opened my eyes to and facilitated involvement in space-related opportunities that may otherwise have completely passed me by. Carrying out this experiment on the space station is extremely rewarding, not only because I'm contributing to top-notch science, but also because I feel as if I'm giving something back to Peter."

The investigation looks at how human heart tissue functions in space. It uses unique 3D tissues made from heart cells called cardiomyocytes derived from human induced Pluripotent Stem Cells (hiPSCs), essentially adult stem cells. The engineered heart tissues, or EHTs, are complex 3D structures, each about the size of a few grains of rice. These structures are more similar to tissues in the body than flat cell cultures in a petri dish or those floating in a flask of liquid.

Researchers expect significant differences in function, structure, and gene expression between EHTs in microgravity and those on the ground. Understanding these differences could help them find ways to prevent or mitigate problematic changes on future long-duration missions.

"We know that microgravity and spaceflight in general have impacts on pretty much every system in the body, and the cardiovascular system is no exception," Lee says. "We don't know what happens at the tissue level, though, and it is hard to keep cells in culture long enough to do long-term studies. The engineered tissue allows us to study long-duration effects."

This investigation employs a new type of sensor that uses magnets to easily record muscle contractions and measures the rate and amount of force the muscle tissues generate in real time. Traditionally, taking such measurements has been difficult, Lee says.

"The traditional way is with a force transducer, a mechanical device that measures the force when you push or pull on it, like when you stand on a scale." The EHTs in this investigation form around flexible posts with tiny magnets on one of their ends. When the muscle tissue contracts, the posts move, changing the magnetic field between the posts and the external magnet. Based on that change, the sensor calculates the post's movement and the force generated by the muscle.

"Another benefit of the investigation is that we had to miniaturize and automate the technology as much as possible to send it to space," Lee says. "Now we have a really advanced, more efficient and more cost-effective technology for use on Earth."

Before proteins are made, cells make RNA, which acts as a messenger to carry instructions from DNA for controlling the process of making proteins. During the investigation, crew members are preserving some of the EHTs so researchers can measure the RNA they synthesize.

"We can analyze and look at the amount of RNA made for thousands of genes at that moment in time, which tells us which genes are turned on or off and at what levels they are expressed," Lee explains. Researchers also will bring some EHTs back to Earth to see whether they recover from changes observed in microgravity.

Principal investigator on the study is Deok-Ho Kim at Johns Hopkins University, Baltimore, and the project includes other co-investigators from the University of Washington. The National Institutes of Health (NIH) funded this research as part of the Tissue Chips in Space initiative, and it is one of nine initiative projects in the ISS U.S. National Laboratory portfolio. EHT builds on previous ISS National Lab research by Joseph Wu, Lee, and Arun Sharma.

By helping scientists understand the mechanisms of how 3D heart cells react to microgravity, this research could assist patients with heart disease on Earth and possibly offer clues for how to protect astronauts on their journey to Mars and back.

"From a personal perspective, it highlights the value of collaboration and mentorship," Meir says. "It is so wonderful to bring things full circle from the two of us working together over 20 years ago with the shared dream of flying in space to working together on Peter's experiment on the space station. When you reach out and give what you can to encourage someone and foster their dreams, your efforts may be exactly what it takes to turn those dreams into reality." 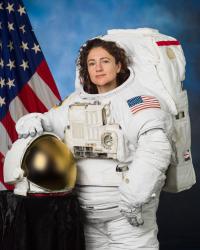