While studies on combat identification typically focus on how technology can help identify enemy forces, researchers sought to understand how teams work together to identify armored vehicles--using only their training and each other.

"We wanted to know what factors would contribute the most to their success," said Dr. Anthony Baker, a scientist at the U.S. Army Combat Capabilities Development Command's Army Research Laboratory, who executed the study while a doctoral student at Embry-Riddle Aeronautical University. "While previous lab studies of combat identification have looked at the performance of an individual, this is the first lab study to our knowledge that considers team combat identification, especially without any technological aids like an automated combat identification system. This was key for helping us understand the aspects of the team, and its members, that contribute the most to their ability to understand and identify what they are seeing."

Spatial visualization skills are particularly important for noticing the finer details that distinguish combat vehicles, which are more difficult to identify from the front than other angles, Baker said.

"Combat vehicles can be broadly similar in their shape and components," Baker said. "For example, many tanks have a similar general shape involving a large, blocky body with a rotating turret. Because of this, few viewing angles may highlight easily-identifiable cues, making it difficult to tell exactly what it is you're looking at."

In this study, researchers prepared pictures and videos of 10 armored vehicles from different angles and views, and presented them to 39 two-person teams. The researchers identified every point when the participants disagreed about which vehicle they saw.

Researchers found that teams that disagreed more performed better at combat identification, regardless of whether their disagreements actually resulted in more correct answers. The data suggested that disagreeing with a team member's first guess caused the team to verify why they identified a vehicle a certain way.

"In other words, when the team disagreed, they had to justify an answer by recounting the details of what they had seen," Baker said. "This process of recalling and discussing details caused teams to think more deeply about their original responses, compared to teams with fewer disagreements that may have simply trusted what the other teammate believed."

Previous studies show that spatial skills are very important when an individual performs combat identification, with men having a slight advantage over women in spatial visualization scores, Baker said; however, the data from this study suggest that while men typically have a slim advantage over women in spatial ability measures, team gender composition was not an important indicator of overall performance.

"The team members' individual spatial abilities--and the team's ability to communicate--are more important than gender," Baker said. "You can have a team of men with lower spatial skills that would likely perform worse at this task than a team of women with better spatial skills, or any other combination."

This research reinforces that to understand how a team does its job, one must consider both individual differences such as spatial skills, and team processes such as communication, Baker said. 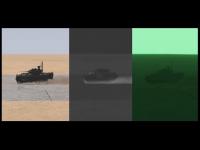