On Oct. 7 at 2:40 a.m. EDT (0740 UTC) the Moderate Resolution Imaging Spectroradiometer or MODIS instrument aboard NASA's Aqua satellite analyzed Nate's cloud top temperatures in infrared light. MODIS found cloud top temperatures of strong thunderstorms in Nates eastern quadrant and in fragmented bands to the east and southeast of center. Temperatures in those areas were as cold as or colder than minus 80 degrees Fahrenheit (minus 62.2 Celsius). Some of those strong fragmented bands of thunderstorms were over western Cuba. Cloud top temperatures that cold indicate strong storms that have the capability to create heavy rain.

At 5 a.m. EDT, the National Hurricane Center report correlated winds with the strongest storms from the Aqua findings as the Discussion noted "an Air Force reconnaissance plane investigated Nate a couple of hours ago and measured peak flight-level winds of 89 knots at 850 millibars to the east of the center. No hurricane force winds were reported west of the center."

The governments of Cuba and Mexico have discontinued all watches and warnings.

Maximum sustained winds are near 80 mph (130 kph) with higher gusts. Some strengthening is possible before Nate makes landfall along the northern Gulf coast. Another reconnaissance plane will investigate Nate soon.

On the forecast track, the NHC said the center of Nate will move across the Gulf of Mexico today and will make landfall along the central U.S. Gulf coast tonight, Oct. 7. 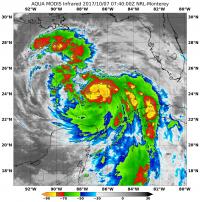 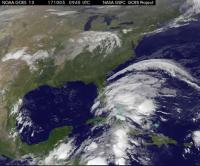 GOES Animation of Nate Turning into a Hurricane