Land-based plants--including the fruits and vegetables in your kitchen--produce and respond to hormones in order to survive. Scientists once believed that hormone signaling machinery only existed in these relatively complex plants. But new research from the University of Maryland shows that some types of freshwater algae can also detect ethylene gas--the same stress hormone found in land plants--and might use these signals to adapt to changing environmental conditions.

The study, published online Jan. 8, 2015 in the inaugural issue of the journal Nature Plants, documents the ethylene signaling pathway in charophytes--a lineage of green algae that are the closest relatives of land plants. The results suggest that the genes and cellular machinery responsible for the ethylene pathway have remained relatively intact across species for more than 450 million years, dating back to when charophytes and land plants evolved from a common aquatic ancestor. At this point in Earth's history, plants and other organisms had not yet colonized land. Except for a few scattered species of algae and bacteria, all life still inhabited the world's lakes, streams and oceans.

The discovery has the potential to transform our understanding of plant evolution and the ways in which plants react to environmental stress. With drought, climate change, pollution, and other stressors affecting crops and natural ecosystems alike, such discoveries could help future efforts to adapt to our changing world.

"We found the complete ethylene pathway, well known in land plants, in a non-plant. That's the astounding thing," said Caren Chang, a study co-author and professor in the UMD Department of Cell Biology and Molecular Genetics. "This changes our perspective on the world. Ethylene normally regulates fruit, flowers, leaves...all things that charophytes just don't have."

Although present in all land plants, the ethylene pathway can have various functions. The hormone, which exists as a gas in its natural state, can ripen fruit, induce flowering or cause leaves to separate from their branches. There are no absolute rules, however. For example, in some species ethylene can stimulate growth, while in others it has the opposite effect. But in all cases, the molecular machinery responsible for sensing the ethylene molecule is exactly the same. Importantly, as the current study shows, it is nearly identical in charophytes as well.

To arrive at their conclusions, the team relied on an innovative combination of advanced bioinformatics techniques and laboratory experiments. They studied five different types of modern charophytes to gather genetic and molecular data, and found signatures of the ethylene pathway in all of them. They then zeroed in on one species, Spirogyra pratensis, to study the algae's reaction to ethylene. They found that ethylene caused the cells of Spirogyra to become longer--as much as twice their normal length, if exposed to enough of the gas.

It will take more work to determine why Spirogyra benefits from this reaction, and what exactly it might be responding to. But Chang and her colleagues have some guesses. Spirogyra lives in shallow pools of freshwater, and sometimes these pools dry out, leaving mats of algae sitting atop shelves of mud. Elongation of these stressed cells could help Spirogyra filaments maintain contact with the water until the next rainstorm.

Or, perhaps the opposite is true: in a heavy deluge, algal mats could become swamped and lose contact with the light-soaked, oxygen-rich surface waters they normally inhabit. In this case, elongated filaments could help the algal cells regain contact with the surface quickly.

"This study has profound implications for understanding the mechanisms of the plant stress response and the colonization of land 450 million years ago," said Charles Delwiche, also a study co-author and professor in the UMD Department of Cell Biology and Molecular Genetics. "Now that we understand that the system is the same in land plants and algae, we can likely extrapolate the results to other plants."

Chang points out that the ethylene pathway is just the beginning. The bioinformatics data turned up evidence of several other hormone pathway genes in modern charophytes, all of which are ripe for future study.

"We don't know whether these pathways will be the same as land plant pathways," as is the case with ethylene, Chang said. "Some will most likely be different, which is a good thing. We'll gain a lot more knowledge than if we had looked at a common land plant, such as corn."

"If you stand anywhere on Earth, except maybe Antarctica, and look around, you're seeing a landscape dominated by plants," Delwiche said. "This work helps advance our fundamental understanding of life on this world."

This research was supported by the National Science Foundation (Award Nos. EF0523719, DEB-1036506 and MCB-0923796), the Maryland Agricultural Experiment Station, a Belgian American Educational Foundation Fellowship, a Howard Hughes Medical Institute/UMD Undergraduate Research Fellowship, and an American Society of Plant Biologists Summer Undergraduate Fellowship. The content of this article does not necessarily reflect the views of these organizations. 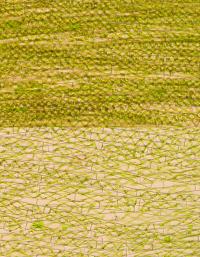 Cell Elongation in Response to Ethylene