Overall, Europe's nature conservation areas are having a positive effect on maintaining biodiversity, but are not working for all species. In particular, there is room for improvement for species which find it harder to disperse, according to an international research team led by the Helmholtz Centre for Environmental Research (UFZ) in its final report on the EU project SCALES. Whilst, for instance, many species of birds have no problem migrating between nature reserves, roads can be virtually insurmountable obstacles for many types of amphibians. The scientists therefore recommend that minimum standards for nature conservation be observed in the areas between protected areas as well. These minimum standards will have no negative impact on agricultural or forestry production, but would improve the connections between the areas under protection. This would do a great deal for nature protection for not much outlay.

Factors with an influence on biodiversity act at different scales. For this reason, a major EU project looked into these scales, with particular emphasis on the European nature protection network "Natura 2000". With over 26,000 onshore areas and covering around 17.5% of the area of the EU, "Natura 2000" is now the largest network of nature reserves in the world. However, what it chiefly lacks is functioning connections between the individual protected areas, which would allow rare species to migrate between them, securing long-term genetic stability for the populations. "The creation of 'Natura 2000' as a large-scale political and ecological network is certainly a considerable step forward towards protecting the diversity of species in Europe, but further measures are needed. In the next few years, the emphasis should be laid on the spatial organisation of the protected areas and of the unprotected areas between them, to manage these in such a way as to allow the organisms to move between sites as necessary," Prof Klaus Henle of UFZ says of the results. The scientists believe that these suggestions would benefit the economy as well as nature protection: natural structures, such as hedges and field margins, are important to endangered species of plants and animals, as they allow them to migrate through the agricultural landscape. At the same time, however, these structures help to counter soil erosion and provide habitats for pollinating insects, which increase the agricultural yield of these areas.

The research has led to a number of new findings which could be extremely useful to those responsible for conservation, such as: larger protected areas need more connecting corridors than smaller ones. It is more effective to connect smaller protected areas to a large one than to interconnect smaller ones. In the long term, connections which allow species to migrate over large distances, following habitats which have shifted as a result of climate change, will be of particular importance.

A database was created as part of the project, containing information on how individual species disperse. Down the line, this information could be used to improve the management of the protection of individual species. "Species which move over large areas, such as the white stork or the wolf, should be managed at least between neighbouring states, or preferably internationally. Species which migrate over shorter distances, such as the other brown hare or the tree frog, on the other hand, can be better protected at federal state level," explains UFZ's Dr Reinhard Klenke. The researchers believe that a focus on the spatial structures is very important in species management. For instance, the needs in terms of designing farm subsidies differ between the former East and West of Germany, due to differences in field sizes. The same also applies to nature conservation.

To overcome the financial barriers caused by the differing distribution of responsibilities between the various jurisdictions, the scientists looked at existing approaches (Portugal, France) and new suggestions (Germany, Poland) for ecological fiscal transfers to the local level. The principle behind this idea is the fact that although many local governments provide services for higher levels and other neighbouring municipalities through their conservation responsibilities – for instance, as a recreation area serving a city – this is very rarely acknowledged in the current fiscal transfer schemes. "On the basis of the example of Portugal, we were able to demonstrate that taking account of Natura 2000 and other conservation areas in the municipal fiscal transfer system can make a considerable contribution to the municipal budget, particularly in rural areas with a high proportion of protected areas. In 2008, for example, one year after Portugal brought in ecological fiscal transfers in its amended Local Finances Law, up to 34% of municipal revenue originated from conservation areas," UFZ's Dr Irene Ring reports. The suggestions that this idea could also help to protect nature in Germany have already been assessed for municipal fiscal equalisation in the Free State of Saxony as well as for the fiscal equalisation scheme in place between the Länder.

With a total budget just shy of 10 million euros and running for five years, the EU project SCALES (Securing the Conservation of biodiversity across Administrative Levels and spatial, temporal, and Ecological Scales) is one of Europe's largest biodiversity research projects. Regional case studies were carried out in the United Kingdom, Finland, Poland, France and Greece. In total, 31 institutions from various European countries, plus Australia and Taiwan, worked on SCALES. The project was coordinated by UFZ in Leipzig. Alongside the many scientific publications, which accompanied the project, Pensoft Publishers has now also brought out a book: "Scaling in Ecology and Biodiversity Conservation".

In the Helmholtz Centre for Environmental Research (UFZ), scientists conduct research into the causes and consequences of far-reaching environmental changes. Their areas of study cover water resources, biodiversity, the consequences of climate change and possible adaptation strategies, environmental technologies and biotechnologies, bio-energy, the effects of chemicals in the environment and the way they influence health, modelling and social-scientific issues. Its guiding principle: Our research contributes to the sustainable use of natural resources and helps to provide long-term protection for these vital assets in the face of global change. The UFZ employs more than 1,100 staff at its sites in Leipzig, Halle and Magdeburg. It is funded by the federal government, Saxony and Saxony-Anhalt. http://www.ufz.de/

The Helmholtz Association contributes to solving major and urgent issues in society, science and industry through scientific excellence in six research areas: Energy, earth and environment, health, key technologies, structure of matter as well as aviation, aerospace and transportation. The Helmholtz Association is the largest scientific organisation in Germany, with 35,000 employees in 18 research centres and an annual budget of around €3.8 billion. Its work is carried out in the tradition of the great natural scientist Hermann von Helmholtz (1821-1894). http://www.helmholtz.de/

Natura 2000 could do a great deal more for nature protection 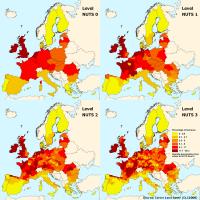 Percentage of Total Area of Pastures at 4 Different Levels