Milan, 19/05/2020 - Having now reached its third year, Project "iHEART" of Politecnico di Milano, winner of an ERC Advanced Grant of euro 2,350,000, has set itself the ambitious goal of creating a complete mathematical model to study the behaviour of the human heart and of its pathologies, a sort of "virtual microscope", which integrates all cardiac function processes, namely electrical impulse propagation, cellular activation, contraction and myocardial relaxation during the systolic and diastolic phase, blood fluid dynamics in both ventricles and atria, and opening-closure dynamics of the four cardiac valves.

Research carried out to date has already allowed to initiate operations of certain subproblems, which are attracting considerable interest in the medical community. Hence, from feasibility studies, focus has shifted to early field tests, in which mathematicians and doctors cooperate to optimise these new tools in the framework of delicate surgical procedures intended to solve certain very important cardiac conditions.

Some examples are given below.

Models developed by project iHeart have led to the production of quantitative indications on factors that contribute to trigger and maintain arrhythmias, such as ventricular tachycardia. Traditional surgical methods consist in performing transcatheter ablations, which allow, via radio frequencies, to deactivate the abnormal areas causing the arrhythmia[1]. In partnership with the Arrhythmology Unit and with the Cardiac Electrophysiology Unit of the IRCCS [scientific institute for hospitalisation and care] San Raffaele Hospital, Milan, researchers verified how cardiac mathematics can underpin and consolidate electrophysiological study in the localisation of intervention areas on the heart wall. Increasingly rapid algorithms, which will allow to perform this type of analysis in real time, thus significantly speeding up the decisional process related to surgery, have also reached an advanced phase of development.

A model is currently being developed in partnership with the Sacco Hospital, Milan, to provide precise indications for the heart surgeon on how to perform myectomy (removal) of a portion of the interventricular septum using a very low cost, non-invasive analysis.

This treatment is the one that is most widely used to treat hypertrophic obstructive cardiomyopathy[2], which consists in a septal thickening which makes hard to eject blood from the left ventricle into the ascending aorta. The mathematical simulation is inserted into the preoperative phase and was considered by medical doctors as an effective guiding tool for this surgical operation.

An additional computational tool has been developed in partnership with the Cardiology and Radiology Departments of S. Maria del Carmine Hospital, Rovereto (TN), to improve cardiac resynchronisation therapy (CRT), which consists in implanting a device capable of restoring correct synchronisation of the heart contraction impaired either by conduction disorders or by the presence of scars. To this end, cardiologists have to map the left ventricle to detect its electrical activity by inserting a catheter-electrode into the blood vessels. The currently validated mathematical instrument will allow to considerably reduce the mapping duration and, thus, the patient exposure to invasive treatment, besides guiding catheter placement in the most curative position for the patient presenting heart failure.

As shown by these examples, iHEART has opened new horizons between mathematics and translational medicine, and has established coordinated and systematic action between Universities and hospitals, creating a new professional figure at the interface between mathematics, bioengineering, medicine and data science.

"As a result of all the new clinical partnerships, and the integrated activity of our young researchers (PhD students and post-doctorate graduates) with that of hospital-based researchers, we shall pave the way for a new discipline, namely Computational Medicine," summarises Prof. Alfio Quarteroni, Project Manager.

Alfio Quarteroni Professor, Politecnico di Milano, Milan, Italy and Professor Emeritus, EPFL, Lausanne, Switzerland acknowledged as one of the most multi-faceted mathematicians in the world, famous for applying mathematics to the most diverse fields: aerospace industry, environmental pollution, impact of earthquakes on civilian buildings, urban planning, medicine, and even competitive sports.

Particularly, he participated in producing the Solar Impulse aircraft, and directed the team of researchers who developed the mathematical model for Alinghi, the Swiss yacht twice winner of the prestigious America's Cup, the Sailing Cup, for two consecutive editions of the race, in 2003 and 2007.

[1]Anomalies in the cardiac rhythm are present in more than 2% of the population (almost 5%, if we consider people aged over 65 years). Source: Arrhythmia and Electrophysiology. 2018, 11 - 7

Mathematics at the service of the heart 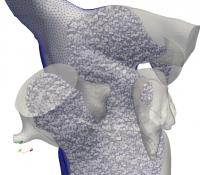