The cruel truth is that throughout the white-tailed deer's range only about half of all fawns live to see their first birthday -- most are killed by predators. However, they have a much better chance of surviving if they are born in farmland rather than in forest, according to Penn State researchers, who collaborated with Pennsylvania Game Commission deer biologists.

They estimated fawn survival in four different study areas in Pennsylvania. In addition, they combined fawn-survival estimates from published data from 29 deer populations in 16 states throughout North America to look at landscape patterns in fawn survival.

Landscapes with mixed forest and agricultural cover had lower rates of mortality due to predators, when compared to forested landscapes, according to adjunct professor of wildlife ecology Duane Diefenbach, whose research group in the College of Agricultural Sciences conducted the work. He noted that it is the first large-scale study to link predation of fawns to habitat characteristics.

Researchers modeled fawn survival relative to percentage of agricultural land cover. The estimated average survival to six months of age was about 41 percent in contiguous forest landscapes with no agriculture. For every 10 percent increase in land area in agriculture, fawn survival increased by almost 5 percent.

"Coyote predation was a greater source of mortality than black bear or bobcat predation, especially in the southeastern U.S," said Diefenbach, who is leader of the Pennsylvania Cooperative Fish and Wildlife Research Unit at Penn State. "But black bears accounted for similar, or greater, proportions of mortality compared to coyotes in several studies we reviewed."

From 2015 to 2016, researchers radio-collared 98 fawns in two study areas in Pennsylvania. They monitored fawn survival and cause-specific mortality in part of the Susquehannock State Forest in Potter County, and in parts of the Rothrock and Bald Eagle state forests in Centre, Mifflin and Huntingdon counties.

Researchers classified mortality as human-caused -- killed by agricultural machinery and vehicle collisions; natural -- excluding predation; and predation. They used the categories of agriculturally dominated, forested, and mixed farmland and forest landscapes. Predation was the greatest source of mortality in all landscapes.

Although landscapes with agricultural cover and mixed agriculture and forest cover had lower proportions and rates of mortality due to predators compared to forested landscapes, the ag-influenced areas had greater proportions and rates of human?caused mortalities, noted lead researcher Tess Gingery, who recently graduated with a master's degree in wildlife and fisheries science.

"Natural sources of mortality such as starvation and abandonment occurred in similar proportions across all landscapes, and human causes were the smallest source of mortality," she said. "We failed to detect any relationship between fawn survival and deer density."

To accomplish the study, which was published recently in the Journal of Wildlife Management, researchers had to closely track pregnant does and fawns, Gingery noted. They monitored survival of radio-collared fawns via ground-based telemetry twice daily from capture until mid-August, one to seven times weekly from mid-August through early December, and one to three times weekly thereafter, until mortality or collar failure.

"We investigated all fawn mortality within 24 hours of signal detection and noted vegetative disturbance, carcass condition, presence of predator scat or prints and any predator-specific kill characteristics to identify the likely predator species," she said.

"Carcasses were collected for necropsy at Penn State's Animal Diagnostic Laboratory, where the cause of death was finally classified."

The findings likely explain some of the movement researchers see with female deer, when a few leave forested areas and go to farmland habitat to have fawns, Diefenbach pointed out. The animals seem to sense they have greater success rearing fawns in agricultural areas, he believes.

"It seems that predators are not as efficient at finding fawns in grasslands or croplands," he said. "And, in a camera-trapping research project we have in progress now, we are seeing fewer predators in farmland habitat than in forests."

Noting that the Pennsylvania component of the study showed fawn survival is slightly higher in the Keystone State than similar landscapes in other parts of North America, Diefenbach suggested the research's findings are important because they will help wildlife managers across the country understand why fawn survival varies.

The findings have management implications, he believes, because the results of the meta-analysis indicate that efforts to alter fawn survival to increase overall deer numbers will be challenging. Although predation is the largest source of mortality and occurred at the greatest rates, predator control efforts are difficult and often unsuccessful.

"Managers looking to influence fawn mortality by increasing habitat diversity and maintaining a landscape structure with a mix of agriculture and forest may observe less fawn predation," he said. "However, reduced antlerless harvests may be more effective at achieving deer population objectives than attempts to manipulate the factors that influence fawn mortality." 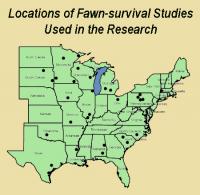