Recent hybridization of the Gulf killifish -- a large minnow common in the heavily polluted Houston Ship Channel -- has enabled the species to adapt rapidly to extreme pollution, a Baylor University study has found.

"Our work demonstrates that hybridization can act as a mechanism of evolutionary rescue -- likely not only in response to chemical pollution, but possibly also in response to the rapid environmental changes associated with global climate change," said senior author Cole Matson, Ph.D., associate professor of environmental science and a member of the Center for Reservoir and Aquatic Systems Research (CRASR) at Baylor University.

The study is published in Science, a peer-reviewed journal of the American Association for the Advancement of Science.

The Gulf killifish, a common inhabitant of coastal estuaries along the northern Gulf of Mexico and the Florida Atlantic coast, is important both ecologically and economically. It is a preferred prey item of many coastal sport fish, including speckled trout, red drum and flounder.

The Houston Ship Channel is heavily polluted from more than 60 years of industrial activity, according to the study. This pollution has led to fish consumption advisories being issued by the Texas Department of State Health Services, with Gulf killifish representing an important link for environmental pollution to pass from contaminated sediments and macroinvertebrates into popular game fish, which are then consumed by humans.

The substantial industrial pollution in the Houston Ship Channel has long posed a significant challenge to local fish populations, fueling the need for adaptation.

"Radical environmental change that causes population decline can limit the ways species can adapt genetically to survive," Matson said. "We suggest that both intra- and inter-species connectivity may be important sources of adaptive variation during extreme environmental change."

Causes for those changes could range from chemical or oil spills to altered salinity to shifting temperatures. In the past, species generally have been able to evolve over centuries, millennia, or even longer, to survive such changes. But now they may need to be able to evolve in decades instead in order to survive.

"This accelerated pace relies more heavily on existing genetic variation or connectivity to other populations, as beneficial genetic mutation is quite rare," Matson said.

"However, under radical pollution pressure, the ultimate solution was not their own genetic variation, but variation they were lucky enough to capture from their sister species, the Atlantic killifish, through hybridization."

For the study, Gulf killifish were sampled from 12 sites in the Houston Ship Channel and Galveston Bay with varying pollution levels. These fish were then cultured in Baylor aquaculture facilities, including the collection of embryos to test for pollution tolerance. This was done by exposing embryos from each of the populations to model pollutants that act through toxicity pathways similar to many chemicals in the Houston Ship Channel.

Researchers found that fish from the most polluted sites were most resistant to pollution, and that the resistance was inherited through multiple generations. To better understand how the fish had evolved, they sequenced the entire genomes of 288 individual fish from seven of the populations, representing different levels of pollution tolerance. By looking for evidence of selection across the genomes of fish from polluted populations, they identified the genes under the strongest selective pressure and so likely the most important for survival in the Houston Ship Channel.

The two genomic regions under the strongest selection traced back to Atlantic killifish, rather than Gulf killifish -- a result of recent hybridization believed to have occurred as a result of human activity, possibly in ballast water from a large ship.

"Although Gulf killifish have adapted to prevent the cardiac deformities expected within the polluted Houston Ship Channel, the impact on other resident fish species is unclear and an area of future research," Matson said. "We are also very interested in how Gulf killifish from other polluted regions have responded to pollution.

"We are not suggesting that hybridization will commonly provide a solution to environmental challenges," he said. "In fact, the limited duration of this hybridization event, and the very strong selective advantage of killifish with these specific gene variants, provided a rare set of circumstances allowing for adaptive introgression without any evidence of the harmful genetic baggage one might expect as a result of hybridization."

More research will be required to understand the relative importance of the various mechanisms of evolutionary rescue in the face of rapid environmental change, Matson said.

"Hybridization is not likely to be a commonly utilized mechanism of evolutionary rescue," he said. "But this study clearly shows that it is possible." 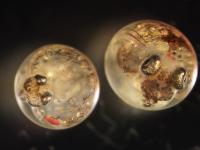