In Hawaii, New Study Tallies Nearly 82 Infections from Rat Lungworm Parasite Over 10-Year Period; Snails and Slugs Continue to Pose Risk Amidst Recent Reports of New Cases and Ongoing Question of How People Are Ingesting the Mollusks

An investigation by health officials in Hawaii has identified 82 human infections, two fatal, across the state over a 10-year period with a brain-invading parasite often called rat lungworm, according to a new study published today in the American Journal of Tropical Medicine and Hygiene The infections were likely contracted by ingesting snails and slugs that carry the parasite.

The study of what is technically called angiostrongyliasis looked back at cases diagnosed from 2007, when state health officials first started tracking infections, to 2017. It's the most comprehensive tally of reported rat lungworm cases in Hawaii. However, 10 more cases were reported in 2018 and five have been reported thus far this year in both visitors to and residents of Hawaii. The researchers report that from 2007 to 2017 annual infections ranged from a low of one to a high of 21, with adult victims mainly reporting headache, stiff neck, fatigue and symptoms consistent with meningitis, and other neurological issues, while children often had fever and irritability. The majority of patients were hospitalized and there were two deaths.

In looking for the source of infections, investigators have noted an invasive half-snail/half-slug creature called a semi-slug that is capable of carrying a high concentration of rat lungworm parasites. Other carriers in Hawaii include the Cuban slug, the giant African snail and the marsh slug.

Some exposures were clear. The researchers report that one victim ate a slug on a dare; others noticed slugs at the bottom of a serving bowl after eating or drinking the contents. But for most infections studied, the exact route of infection was not conclusively identified. The researchers noted that in some instances, victims reported eating unwashed produce, which they believe might have increased the risk of exposure.

The state has established a Joint Task Force on Rat Lungworm Disease to address potential mitigation measures, increase public awareness to prevent infection, and to facilitate appropriate care for those affected.

A new technology sewn into the lining of mosquito-fighting bednets provides precise, detailed data on household bednet use, insights that could help answer why the effectiveness of this mainstay of malaria control appears to be waning, according to a new study from researchers at the University of California, San Francisco appearing today in the American Journal of Tropical Medicine and Hygiene.

A global effort to distribute long-lasting insecticide-treated bednets has been credited as a key force driving a dramatic reduction in malaria infections and deaths. But the researchers cited recent studies indicating that bednets may no longer be as effective as previously thought, though exactly why is not clear.

Researchers developed and tested a technology called SmartNet that uses a battery-powered microcontroller connected to a conductive fabric in the bednets to record when they are in use or folded up. Testing in 10 households in rural Uganda over 418 days found average use was relatively high--85 to 90 percent between 9 p.m. and 6 a.m., when malaria-carrying mosquitoes are out in force. But usage was also highly variable, with some households using them only half as much as others and in some instances failing to use them at all, increasing risks of malaria.

The researchers hope this kind of automated monitoring can provide an inexpensive, unobtrusive way of tracking household patterns of bednet use. They note that while the search to understand the decline in bednet efficacy has focused on mosquito biting behavior, insecticide resistance and bednet durability, the role of human behavior "is a potentially important and under-researched component" of the problem.

New research shows that non-physician clinicians in settings with health care resource shortages can learn to use point-of-care ultrasound (POCUS) to accurately diagnose pneumonia in children, according to a new study published today in the American Journal of Tropical Medicine and Hygiene.

Pneumonias are the leading cause of deaths in children under 5 years of age worldwide, particularly in low-resource settings such as Aweil, South Sudan where the study was conducted. Unfortunately, in these settings the diagnosis of pneumonia can be difficult, due to either lack of access to X-ray or overly sensitive clinical criteria. POCUS is a novel diagnostic method in which non-radiologists perform bedside ultrasounds. Lung POCUS, in particular, has been shown to improve the diagnosis of pneumonia. However, there are limited data using lung POCUS in low-resource settings.

Researchers from Médecins Sans Frontières (MSF), Icahn School of Medicine at Mount Sinai, University of Michigan School of Medicine, and the University of Washington examined the feasibility of training Clinical Officers (COs)—non-physician clinicians—in South Sudan to perform lung POCUS to differentiate among causes of lower respiratory tract disorders. Six COs underwent a brief training and subsequently each performed 60 lung POCUS studies on hospitalized pediatric patients under 5 years of age with criteria for pneumonia. Two blinded experts, with a tiebreaker expert adjudicating results, evaluated both the image quality and the CO’s interpretations. The experts rated 99.1% of the images acceptable and 86.0% of the CO interpretations appropriate. The researchers said the results of this study can be used to guide development of policies that address unmet diagnostic needs for pneumonia and thereby reduce associated medical problems and deaths in children in low resource settings. 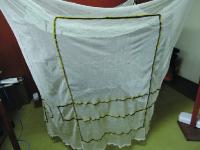 Side View of SmartNet