Severe weather is becoming more and more frequent around the globe. Often, the difference between minor property damage or something far more devastating is the ability to predict a storm in the first place, especially when it comes to the short-lived but severe variety.

"Severe convective storms are intense local phenomena. Research on such phenomena requires high-resolution observational networks, and high-resolution numerical simulation and prediction tools, as well as researchers well trained on the subject," said XUE Ming, a professor of meteorology and the director of the Center for Analysis and Predictions of Storms at the University of Oklahoma.

XUE is also an adjunct professor at the School of Atmospheric Sciences at Nanjing University, and a member of the Key Laboratory of Mesoscale Severe Weather/Ministry of Education, affiliated with Nanjing University.

"For the past decade, rapid progresses have been made in establishing modern, integrated meteorological observation systems in China," XUE said, who also pointed out the availability of mobile research weather radars and other instruments needed to study convective storms. "The time was right to carry out systematic and organized research on convective storms, with the goal of improving the prediction skills of such weather systems."

Since 2013, project scientists have published 224 papers on convective weather in peer-reviewed journals. To help publicize the OPACC project, and the research results so far, Advances in Atmospheric Sciences - sponsored by the Institute of Atmospheric Physics of the Chinese Academy of Sciences and published by Springer - organized a special collection of 16 original papers spanning the October and November 2016 issues. The papers cover severe convection subjects ranging from extreme precipitation climatology, data assimilation, numerical simulation and prediction, radar observation, and analyses for convective weather, as well as a study on tornadic events. XUE, a co-chief editor of the journal with LYU Daren and ZHU Jiang, authored the collection's preface.

XUE, as an expert on tornado dynamics and convective-scale weather in general, also contributed several papers to the collection, including a featured highlight article on several recent tornadoes in China.

"In China, heavy and extreme precipitation, as well as typhoons have received much more attention in research over the past half a century or so, because they tend to produce widespread damages, and their larges sizes also make observational data on these systems much more readily available," XUE said. Observational data on tornadoes is much more difficult to collect, as the equipment has to be physically close to the twister. The tools are more readily available in the United States, where with more than a thousand tornadoes a year, tornado research and prediction has been a top priority.

At about a one to 10 ratio, China has far fewer tornadoes than the United States. However, China's tornadoes tend to be in heavily populated areas along the coast, and cause significant damage and loss of life. The tornadoes introduced in XUE's paper were spawned from a variety of weather conditions. The paper serves as a call to action for more tornado research in China, as well as the development and implementation of forecasting and warning tools and operations.

"The exact causes of tornado formation are still not well understood... Without understanding the tornado formation processes, and the necessary and sufficient conditions for tornadogenesis, it is difficult to predict tornadoes, or to provide accurate and effective tornado warnings to the public," XUE said. "Research on tornadoes will help us understand [these] questions, and to construct numerical models and establish methods and tools for predicting tornadoes in advance, and... to provide advanced warnings to the public and reduce loss of life and properties."

XUE co-authored another paper that addresses this prediction problem, focusing on the July 21, 2012 flash flood in the Beijing area. Seventy-nine people died, and the area suffered 11.64 billion Chinese Yuan (more than $1.8 billion U.S. dollars) in damages.

XUE's study uses the 2012 flood to demonstrate the efficacy of an ensemble forecasting system that uses a four-kilometer spacing grid to predict extreme rainfall. The system can successful predict accumulated precipitation of more than 400 millimeters, and it can calculate the probability of extreme precipitation.

"Compared to single deterministic forecasts, ensemble forecasts can better capture extreme events and, at the same time, provide information on the reliability or uncertainty of the forecasts. The ensemble mean forecast is often more accurate than individual forecasts," XUE said. "Rapidly updated ensemble probabilistic prediction at convection-resolving resolutions is the future for the forecasting and warning of severe convective weather, and the effective assimilation of very high-resolution weather observations into the forecasting models is also essential."

XUE hopes that the special issue of Advances in Atmospheric Sciences will heighten awareness regarding convective weather research associated with the OPACC project, as well as potentially attract more scientists to collaborate in future research endeavors. 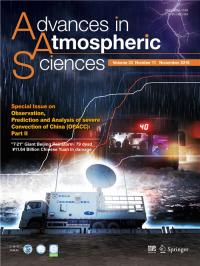