Whoopi, who has swum with thousands of tourists WA's over the years, was hit by a boat in 2015, suffering propeller cuts measuring up to 20 centimetres to the edge of her wing.

Dr Christine Dudgeon from UQ's School of Biomedical Sciences said such a strike was relatively rare, but could cause significant injuries to the animal.

"Manta rays don't surface to breathe, which you think would reduce their susceptibility to boat strike," Dr Dudgeon said.

"But these rays, like whale sharks, tiger sharks and other sharks and rays, spend considerable time in surface waters for activities like basking and feeding.

"Most wounds in these species have been attributed to predation, mating attempts and fishing-related injuries or entanglement, but boats do end up hitting some rays - and Whoopi had the cuts to prove it."

Manta rays and other sharks and rays are considered to have high healing capacity.

"This is likely due, in part at least, to a unique adaptive immune system," Dr Dudgeon said.

"However, few studies have investigated the rate of wound healing in sharks and rays, and these have mostly focused on the impacts of external and internal tagging procedures, not boat strikes."

To investigate this phenomenon further, the team compared underwater photographs taken in the Ningaloo Coast World Heritage Area of WA over the past 15 years, and found evidence of greater incidence of boat strike on manta rays than previously thought.

"Whoopi showed us just how fast these beautiful creatures can heal," he said.

Dr Dudgeon said the research could be used to inform policy for designing adequate spatial management for the region.

"It's imperative we reduce the impact of vessels on manta rays and protect their critical habitat," she said.

"Such management may include speed restrictions during high usage periods, vessel free zones, the use of propeller guards or alternative motors - like jet motors - and public education on vessel-wildlife conflict."

"Manta rays are incredible healers, but it's important we keep them safe in the first place." 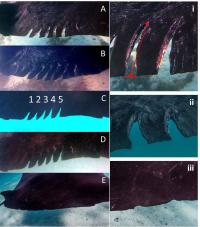