Tropical Cyclone Damien made landfall on Feb. 9 along the northern Pilbara coast of Western Australia. On Feb. 10, the GPM or Global Precipitation Measurement mission core satellite analyzed the rainfall generated by the remnants that triggered warnings.

As Damien was making landfall around 1:15 a.m. EST (0615 UTC) on Feb. 9, the MODIS instrument aboard NASA's Aqua satellite captured a visible image of the storm. The MODIS image showed the recently developed eye on the coastline. By 11 a.m. EST, Damien's center had moved inland into Western Australia. Tropical Cyclone Damien has weakened to a Category 2 system, according to the Australian Bureau of Meteorology (ABM).

On Feb. 10 at 5:41 a.m. EST (1041 UTC), GPM passed over Western Australia and measured the rate of rainfall from Damien's remnants. GPM showed heaviest rainfall occurring south of the center and falling at a rate of at least 0.2 inches (5 mm) per hour.

The Australian Bureau of Meteorology posted an update at 3 a.m. EST (4 p.m. AWST), Feb. 10, and noted Ex-Tropical Cyclone Damien was located over the northeast Gascoyne, about 62 miles (100 kilometers) north northeast of Meekatharra, moving towards the south.

ABM said, "Ex-Tropical Cyclone Damien is expected to carry with it an area of heavy rainfall as it moves south southeast through the southeastern Gascoyne and the adjacent Goldfields." That heavy rainfall that may lead to flash flooding.

ABM's update noted, "Heavy rainfall is forecast over the southeastern Gascoyne and adjacent Goldfields, this area will gradually move south overnight Monday (Feb. 10). Strong and squally winds are also possible. Locations which may be affected include Mount Magnet, Cue, Leinster and Sandstone." 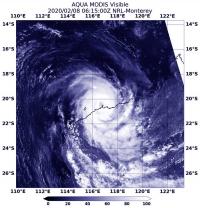