NASA and NOAA satellites are providing various views of the major winter storm marching toward the U.S. East coast on March 13. The storm is forecast to merge with another system and is expected to bring large snowfall totals from the Mid-Atlantic to New England.

NASA's Aqua satellite gathered infrared data from the storm system and the area ahead of the storm for cloud and ground temperatures. NOAA's GOES-East satellite provided visible and infrared imagery that showed the extent and the movement of the system.

Forecasters at the National Weather Service's Weather Prediction Center (WPC) noted that the low pressure system crossing the Midwest states and Ohio Valley is expected to merge with another low off the southeast U.S. coast. WPC stated "This will allow for a strong nor'easter to develop near the coast and cause a late-season snowstorm from the central Appalachians to New England, including many of the big cities in the Northeast U.S."

An Infrared Look at the Storm

Infrared light provides scientists with temperature data and that's important when trying to understand the strength of storms. When it comes to snow storms, both ground temperature and cloud top temperatures are important. The higher the cloud tops the colder they are, and stronger the storm. Infrared data, such as that gathered by the AIRS instrument aboard NASA's Aqua satellite, can provide that important information.

When NASA's Aqua satellite flew over the eastern U.S. on March 13 at 07:35 UTC (3:35 a.m. EST), it took a reading of ground and cloud top temperatures. AIRS detected some strong storms with cloud top temperatures as cold as minus 63 degrees Fahrenheit (minus 53 degrees Celsius) stretching from Michigan southwest through Illinois and into southeastern Missouri and northwestern Arkansas. Those storms have the capability to produce heavy precipitation, which in this case would be heavy snowfall rates.

AIRS data also showed the temperatures at the surface on the East coast (and ahead of the Midwest system) were as cold as 270 kelvin or 26.33 degrees Fahrenheit (minus 3.15 degrees Celsius). That's cold enough for snow to stick on the ground.

Making a Satellite Movie of the Storm

The path of the Midwest low pressure system was captured in a NASA animation or movie using infrared and visible imagery from NOAA's Geostationary Operational Environmental or GOES East satellite. The imagery spanned two days from March 11 through March 13 at 1715 UTC (1:15 p.m. EST).

To create the video and imagery, NASA/NOAA's GOES Project located at NASA's Goddard Space Flight Center in Greenbelt, Maryland overlays the cloud data from NOAA's GOES-East satellite on a true-color image of land and ocean created by data from the Moderate Resolution Imaging Spectroradiometer, or MODIS, instrument that flies aboard NASA's Aqua and Terra satellites. Together, these data create the entire animation of the storm and show its movement.

GOES satellites provide the kind of continuous monitoring necessary for intensive data analysis. Geostationary describes an orbit in which a satellite is always in the same position with respect to the rotating Earth. This allows GOES to hover continuously over one position on Earth's surface, appearing stationary.

On Monday, March 13, 2017 the National Weather Service noted: "A powerful nor'easter will bring very heavy snow, ice, strong winds, and dangerous travel conditions from the Middle Atlantic to New England through Tuesday. The heaviest snowfall is expected to occur from the northern Middle Atlantic to Southern New England where 12 to 18 inches can be expected with localized amounts up to 2 feet. Strong winds could down trees and cause power outages."

According to NWS, in those areas closer to the coast from southern New Jersey to the Carolinas, rain is expected with amounts in excess of an inch likely.

For more information about GOES satellites, visit: http://www.goes-r.gov/ or goes.gsfc.nasa.gov/ 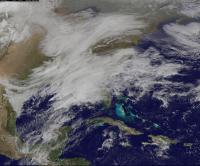 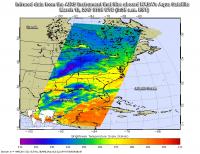