In a new study of volcanic processes, Bristol scientists have demonstrated the role nanolites play in the creation of violent eruptions at otherwise 'calm' and predictable volcanoes.

The study, published in Science Advances, describes how nano-sized crystals (nanolites), 10,000 times smaller than the width of a human hair, can have a significant impact of the viscosity of erupting magma, resulting in previously unexplained and explosive eruptions.

"This discovery provides an eloquent explanation for violent eruptions at volcanos that are generally well behaved but occasionally present us with a deadly surprise, such as the 122 BC eruption of Mount Etna," said Dr Danilo Di Genova from the University of Bristol's School of Earth Sciences.

"Volcanoes with low silica magma compositions have very low viscosity, which usually allows the gas to gently escape. However, we've shown that nanolites can increase the viscosity for a limited time, which would trap gas in the sticky liquid, leading to a sudden switch in behaviour that was previously difficult to explain."

"The next stage was to re-melt these rocks in the laboratory and recreate the correct cooling rate to produce nanolites in the molten magma. Using the scattering of extremely bright synchrotron source radiation (10 billion times brighter than the sun) we were able to document nanolite growth."

"We then produced a nanolite-bearing basaltic foam (pumice) under laboratory conditions, also demonstrating how these nanolites can be produced by undercooling as volatiles are exsolved from magma, lowering the liquidus."

Professor Heidy Mader added: "By conducting new experiments on analogue synthetic materials, at low shear rates relative to volcanic systems, we were able to demonstrate the possibility of extreme viscosities for nanolite-bearing magma, extending our understanding of the unusual (non-Newtonian) behaviour of nanofluids, which have remained enigmatic since the term was coined 25 years ago."

The next stage for this research is to model this dangerous, unpredictable volcanic behaviour in actual volcanic situations. This is the focus of a Natural Environment Research Council (UK) and National Science Foundation (US) grant 'Quantifying Disequilibrium Processes in Basaltic Volcanism' awarded to Bristol and a consortium of colleagues in Manchester, Durham, Cambridge and Arizona State University. 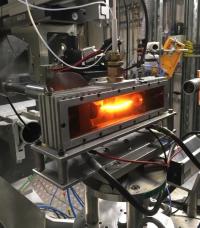