Air pollution in China has received great attention due to its effects on climate and human health. A recent study showed the contrasting variation of air pollutants in China using long-term comprehensive data sets from 2013 to 2017, during which Chinese government took major efforts to reduce anthropogenic emission in polluted regions. A significant decreasing trend in the PM2.5 concentration in heavily polluted regions of the eastern China was happening. As a consequence, the heavily polluted days decreased in corresponded regions. However, surface ozone showed increasing trends in most of the cities from 2013 to 2017, which indicates a stronger photochemical pollution. 'It is so inspiring that the blue sky is coming back. However, surface ozone is increasing, which is a new challenge for future air pollution control. For the scientists, I think it is a unique opportunity to advance our current atmospheric chemistry and physics knowledge about influence of anthropogenic activity on our atmosphere' says Yonghong, the first author of the work.

In addition, using long-time measurements of aerosol chemical composition in urban Beijing, they revealed that concentrations of organic aerosol, nitrate, sulfate, ammonium and chloride showed a remarkable reductions from 2013 to 2017, connecting the decreases in aerosol precursors with corresponding chemical components closely.

Contrasting trends of PM2.5 and surface ozone concentrations in China from 2013 to 2017

Contrasting trends of PM2.5 and surface ozone in China 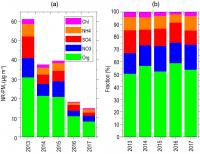