Researchers have discovered gigantic clouds of gaseous carbon spanning more than a radius of 30,000 light-years around young galaxies using the Atacama Large Millimeter/submillimeter Array (ALMA). This is the first confirmation that carbon atoms produced inside of stars in the early Universe have spread beyond galaxies. No theoretical studies have predicted such huge carbon cocoons around growing galaxies, which raises questions about our current understanding of cosmic evolution.

"We examined the ALMA Science Archive thoroughly and collected all the data that contain radio signals from carbon ions in galaxies in the early Universe, only one billion years after the Big Bang," says Seiji Fujimoto, the lead author of the research paper who is an astronomer at the University of Copenhagen, and a former Ph.D. student at the University of Tokyo. "By combining all the data, we achieved unprecedented sensitivity. To obtain a dataset of the same quality with one observation would take 20 times longer than typical ALMA observations, which is almost impossible to achieve."

Heavy elements such as carbon and oxygen did not exist in the Universe at the time of the Big Bang. They were formed later by nuclear fusion in stars. However, it is not yet understood how these elements spread throughout the Universe. Astronomers have found heavy elements inside baby galaxies but not beyond those galaxies, due to the limited sensitivity of their telescopes. This research team summed the faint signals stored in the data archive and pushed the limits.

"The gaseous carbon clouds are almost five times larger than the distribution of stars in the galaxies, as observed with the Hubble Space Telescope," explains Masami Ouchi, a professor at the National Astronomical Observatory of Japan and the University of Tokyo. "We spotted diffuse but huge clouds floating in the coal-black Universe."

Then, how were the carbon cocoons formed? "Supernova explosions at the final stage of stellar life expel heavy elements formed in the stars," says Professor Rob Ivison, the Director for Science at the European Southern Observatory. "Energetic jets and radiation from supermassive black holes in the centers of the galaxies could also help transport carbon outside of the galaxies and finally to throughout the Universe. We are witnessing this ongoing diffusion process, the earliest environmental pollution in the Universe."

The research team notes that at present theoretical models are unable to explain such large carbon clouds around young galaxies, probably indicating that some new physical process must be incorporated into cosmological simulations. "Young galaxies seem to eject an amount of carbon-rich gas far exceeding our expectation," says Andrea Ferrara, a professor at Scuola Normale Superiore di Pisa. 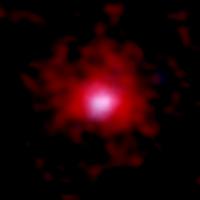