NASA's Aqua satellite imagery showed just a small area of strong thunderstorms remained in the now weaker Tropical Depression Pali as it moved closer to the Equator. NASA's RapidScat instrument measured surface winds in the storm as it was weakening to a depression.

When Pali was still a tropical storm on Jan. 13 at 1200 UTC (7 a.m. EST), NASA's RapidScat instrument measured strongest sustained winds near 27 meters per second (60.4 mph/97.2 kph) both east and west of center. Within a day, increased vertical wind shear weakened the storm to a depression. Maximum sustained winds are not always equally distributed in a hurricane or tropical storm, and the RapidScat instrument helps forecasters find the strongest quadrants of a storm. RapidScat is an instrument that flies aboard the International Space Station.

Thunderstorms development appeared to be limited to a small area north or northeast of Pali's center. That's what a false-colored infrared image showed on Jan. 14 at 1335 UTC (8:35 a.m. EST) that was taken by the Moderate Resolution Imaging Spectroradiometer (MODIS) instrument that flies aboard NASA's Aqua satellite. The MODIS data showed the small area of thunderstorms had cloud top temperatures near minus 80 Fahrenheit (minus 62.2 Celsius). NASA research has shown that thunderstorms with cloud top temperatures that high have the ability to generate heavy rain.

Maximum sustained winds were near 35 mph (55 kph) and continued weakening is expected. The estimated minimum central pressure is 1003 millibars. The depression was moving toward the southwest near 6 mph (9 kph) and that general motion is expected to continue until Pali dissipates sometime on Jan. 15.

It is south to southwesterly vertical shear between 20 and 25 knots and Pali's proximity to the equator are expected to lead to the demise of the storm. In addition, forecaster Brichard of NOAA's Central Pacific Hurricane Center said "strong westerly winds along the equator which aided in the development of Pali a week ago are no longer present...with the flow now headed toward an expansive area of deep convection in the southern hemisphere."

Pali is expected to dissipate sometime on Friday, January 15, 2016. 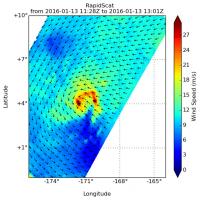