In a new study, fisheries researchers from North Carolina State University found that black sea bass (Centropristis striata) can usually survive the physical trauma that results from being hauled up from deep water then released at the surface. The finding is part of a larger study of the fish's mortality rate, which will inform stock assessments designed to help ensure that the black sea bass fishery is sustainable.

Black sea bass are bottom-dwelling fish, and are often caught at depths of greater than 60 feet. When the fish are brought to the surface, the rapid change in pressure causes the fish's swim bladder to expand. This forces other organs out of the way and can result in visible "barotrauma" – such as the fish's stomach being forced partially out of its mouth.

Conventional wisdom long held that this sort of visible barotrauma meant that a fish would die when thrown back into the water. But that's not true, according to the NC State study.

The research team was attempting to develop accurate estimates of "discard mortality" rates for black sea bass, meaning that they wanted to know what percentage of the fish would die if they were caught and thrown back. Discard mortality rates are used to make informed stock assessments for fish species, because it helps fisheries officials understand how many fish that are caught and released can be expected to survive. Black sea bass are a valuable species for commercial fishing and are also popular with recreational anglers. Millions of black sea bass are caught and released by recreational anglers off the south Atlantic coast of the U.S. each year.

Over the next year, tagged black sea bass were caught by the researchers, or by recreational anglers or commercial fishing operations who returned the tags to the researchers. Researchers could then compare the number of tags returned from the experimental group (those tagged on the surface) to those returned from the control group (those tagged on the bottom). This allowed them to determine discard mortality rates.

The researchers had put the fish in the experimental group into one of four categories: those without visible injury; those with visible barotrauma; those with hook trauma (meaning the hook had caused significant internal injury); and "floaters" – those that couldn't swim down into the water at all.

To their surprise, the researchers found that approximately 90 percent of the fish in the experimental group with visible barotrauma (but that weren't floaters) survived. This was about the same survival rate as for fish that exhibited no visible injury at all. Fish with hook trauma had a survival rate of 36 percent, while floaters had a 16 percent survival rate.

"In previous work, estimates of discard mortality were limited to time periods soon after release," says Paul Rudershausen, a research associate at NC State's Center for Marine Sciences and Technology and lead author of a paper describing the research. "By tagging a control group, we were able to estimate the long-term effects of injuries associated with fishing."

In addition to lending key insight into the black sea bass fishery, Rudershausen notes that the study "may give us insight into mortality for other important species with similar characteristics, such as red grouper and gag grouper."

The paper, "Estimating reef fish discard mortality using surface and bottom tagging: effects of hook injury and barotrauma," is forthcoming from the Canadian Journal of Fisheries and Aquatic Sciences. The paper was co-authored by Dr. Jeff Buckel and Dr. Joe Hightower, professors of applied ecology at NC State. The researchers worked closely with fisherman Tom Burgess on the project. The work was done under North Carolina Sea Grant Fishery Resource Grant projects 07-FEG-01 and 11-FEG-04. 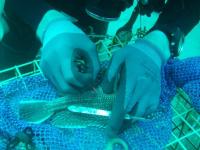