Scientists in the Gulf of Mexico now have a better understanding of how naturally-occurring climate cycles--as well as human activities--can trigger widespread ecosystem changes that ripple through the Gulf food web and the communities dependent on it, thanks to a new study published Saturday in the journal Global Change Biology.

A team of NOAA scientists spent three years reviewing over 100 indicators derived from environmental, fishery, and economic data, including sea surface temperature, currents, atmospheric patterns, fishing effort, harvest, and revenues. Through extensive analysis, they found a major ecosystem reorganization that appeared to be timed with a naturally-occurring climate shift that occurred around 1995.

The climate phenomenon is known as the Atlantic Multidecadal Oscillation (AMO), a climate signal in the North Atlantic Ocean that switches between cool and warm phases, each lasting for 20-40 years at a time. The AMO, which was in a cool phase between 1965 until 1995 and has been in a warm phase since, influences global ocean and weather conditions in the northern hemisphere such as hurricane activity in the Atlantic ocean and the severity and frequency of droughts.

However, the AMO is not as extensively studied as other climate phenomena, such as El Nino, and this study is the first to investigate what scientists hope will be many future studies examining how the AMO influences ecosystem-scale change in the Gulf. Scientists hope this work will spur interest in further studying this phenomenon and its implications for the marine environment in this region.

"These major ecosystem shifts have probably gone unrecognized to date because they are not apparent when considering single species or individual components of the ecosystem," said lead investigator Dr. Mandy Karnauskas of NOAA's Southeast Fisheries Science Center. "Only when we put a lot of things together -- including currents, hypoxia, fish abundances, fishing effort, and more -- does a strong climate signal emerge."

Additionally, scientists observed shifts in many species around the late 1970s coincident with the advent of the U.S. Magnuson-Stevens Fishery Conservation and Management Act- a policy designed to set rules for international fishing in U.S. waters, make the expansion of certain fisheries more favorable for economic development, and ensure the long-term sustainability of the nation's fish stocks.

Other human influences that are not as pronounced--or easily distinguishable--include coastal development, agricultural runoff, oil spills, and fishing. Natural phenomena like coastal storms and hurricanes play a role as well.

The scientists expect their study to be useful to resource managers throughout the Gulf region. While managers cannot control Earth's natural climate cycles, they may need to consider how to alter management strategies in light of them, in order to effectively meet their mandates.

The full study, Evidence of climate-driven ecosystem reorganization in the Gulf of Mexico, is now available on line: http://onlinelibrary.wiley.com/doi/10.1111/gcb.12894/abstract

Gulf of Mexico marine food web changes over the decades 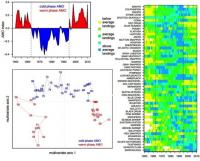 The AMO and the Gulf of Mexico