Great leaps in science and technology have been propelled by recent advances in seeing fast evolving physical phenomena, as they happen. Femtosecond lasers from the infrared to the X-ray region have enabled us to 'watch', in real time, atoms dance in molecules and solids on femtosecond and picosecond timescales. Watching such fascinating motions not just in real time but at the spatial locations where they happen, is a bigger challenge.

It is precisely this advance that has been made by a team of researchers at the Tata Institute of Fundamental Research, Mumbai, York University and the Rutherford Appleton Laboratories, UK [1]. They exploded a solid surface with an ultrahigh intensity (10^19 W/sq.cm), 25 femtosecond laser pulse (pump) creating a hot, dense plasma and monitored its ultra-rapid motion by reflecting a weak second femtosecond pulse (probe). The Doppler shifts in the wavelength imposed on the reflected probe pulse by the fast evolving plasma give away the outward (blue shift) and inward (red shift) motions of the plasma.

No previous study captured the motion on the entire plasma surface -- the 'dance floor' -- in a single experiment. This team coupled femtosecond time resolution with micrometre space resolution, thereby capturing the ultra-rapid twists and turns of the plasma at different transverse locations.

The experiments devised a novel 2-D Doppler monitor with sixteen independent, single shot, high resolution spectrometers all triggered by the pump laser pulse and capturing the instantaneous velocity of the plasma at different spatial locations. They show that different portions of the plasma move in and out at different times, contrary to the usual expectation of a somewhat uniform motion. This new method can prove very useful for tracking the flow of heat and energy along the surface and watching the growth of plasma instabilities, very important for understanding laser plasma science and pushing forward applications of high intensity, femtosecond laser driven laser plasmas in imaging and laser fusion.

Watching the ultrafast dance moves of a laser plasma 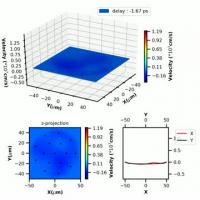