Researchers at LSTM have found that mosquitoes that lose multiple legs after contact with insecticide may still be able to spread malaria and lay eggs.

WHO guidelines for testing of long-lasting insecticidal nets are widely used by scientists when comparing the efficacy of different bed nets or measuring the susceptibility of different mosquito populations. Leg loss is a common outcome of insecticide exposure, and these guidelines dictate that mosquitoes that survive insecticide exposure with fewer than three legs should be considered dead. The implicit assumption is that these mosquitoes are unable to bite humans, and therefore do not contribute to malaria transmission. However, a study, published today in Scientific Reports, examined whether leg loss inhibits mosquito biting, revealing that one and two legged mosquitoes can both bite a human hand and lay eggs thereafter.

The most widely deployed mosquito control tools are insecticide-based, functioning to either repel or kill mosquitoes within a home, these include long lasting insecticide treated bed nets and indoor residual spraying. Pyrethroid treated bed nets are acutely neurotoxic to mosquitoes causing symptoms such as lack of coordination, paralysis and violent spasms. One results often seen in laboratory tests is limb loss and the group tested the assumption that the loss of several limbs would leave the female mosquito unable to play any further part in the spread of malaria. These experiments demonstrated that insecticide-induced leg loss had no significant effect upon blood feeding or egg laying success.

Dr Alison Isaacs is first author on the study. She said: "We conclude that studies of pyrethroid efficacy should not discount mosquitoes that survive insecticide exposure with fewer than six legs, as they may still be capable of biting humans, reproducing, and contributing to malaria transmission."

The team are now calling for further work to be carried out in a field setting to see if the results are replicated. "Understanding insecticide efficacy is key to designing a malaria control strategy and these tests must accurately reflect mosquito and insecticide interaction in the field." Continued Dr Isaacs. "We hope that these findings will prompt a re-evaluation of the WHO testing guidelines, as in their current form they may be overestimating the efficacy of bed nets."

Insecticide-induced leg loss does not eliminate biting in mosquitoes 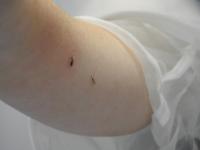