PORTLAND, Maine -- August 5, 2019 -- A new study published this week shows how marine ecosystems around the world are experiencing unusually high ocean temperatures more frequently than researchers previously expected. These warming events, including marine heatwaves, are disrupting marine ecosystems and the people who depend on them.

Dr. Andrew Pershing, Chief Scientific Officer at the Gulf of Maine Research Institute, led the study, which is entitled "Challenges to natural and human communities from surprising ocean temperatures," and published in the Proceedings of the National Academy of Sciences (PNAS).

As part of this new research effort, Dr. Pershing, whose research previously identified the Gulf of Maine as one of the most rapidly warming ecosystems in the global ocean, looked at similar warming trends around the globe.

Dr. Pershing and his colleagues examined 65 large marine ecosystems from 1854-2018 to identify the frequency of surprising ocean temperatures, which they defined as an annual mean temperature that is two standard deviations above the mean of the previous three decades.

The researchers identified these "surprises" all over the world, including the Arctic, North Atlantic, eastern Pacific, and off of Australia. Moreover, these warming events occurred at nearly double the rate the scientists expected.

"Across the 65 ecosystems we examined, we expected about six or seven of them would experience these 'surprises' each year," explains Pershing. "Instead, we've seen an average of 12 ecosystems experiencing these warming events each year over the past seven years, including a high of 23 'surprises' in 2016."

The study explores the associated impacts of these warming events on both natural and human communities.

In natural communities (e.g. coral reefs, fish, plankton, etc.), new species that prefer warmer conditions can often replace cold-loving species that suffer when an ecosystem warms. In gradually warming ecosystems, the changeover of species should be able to keep pace, according to the study. However, in ecosystems that are experiencing change much faster, these natural communities are expected to suffer reductions in both biomass and diversity.

An increase in ocean "surprises" also affects humans. The researchers explored the challenge rapid ecosystem changes pose to people making decisions about ocean resources. As the planet continues to warm, ecosystems and human communities will adapt to the changing conditions. However, according to the scientists, it is unclear whether such adjustments will keep pace as the climate trends accelerate.

As part of the study, the research team compared two distinct community decision-making strategies. Using an economic model, they compared forward-looking decisions based on climate trends to the results of decisions made only on historical experiences. They found forward looking decisions fare much better as the rate of warming increases.

According to the study, many marine ecosystems are already warming fast enough to apply this decision-making framework.

"We are entering a world where history is an unreliable guide for decision making," says Pershing. "In a rapidly changing world, betting that trends will continue is a much better strategy."

As the incidence of these extreme warming events continues to rise, the results of this study highlight the importance of using climate projections and other predictive tools to make decisions about the future. 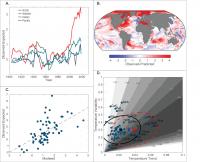