Scientists in France are reporting for the first time that sculptors from the fantastically wealthy ancient Empire of Mali — once the source of almost half the world’s gold — used blood to form the beautiful patina, or coating, on their works of art. In a study scheduled for the Dec. 15 issue of ACS’ Analytical Chemistry, a semi-monthly journal, Pascale Richardin and colleagues describe development of a new, noninvasive test that accurately identifies traces of blood apparently left on ancient African artifacts used in ceremonies involving animal sacrifices.

The researchers describe use of three highly sensitive tests — time-of-flight secondary ion mass spectrometry, infrared microscopy, and X-ray microfluoresence — to identify iron-bound (the chemical fingerprint of blood) on the patina from seven Dogon and Bamana sculptures from Mali. The technique, which caused virtually no damage to priceless artworks, also is suitable for identification of blood on other ancient artifacts, the study states.

Scientists in Pennsylvania are reporting development of a fuel cell that uses pollution from coal and metal mines to generate electricity, solving a serious environmental problem while providing a new source of energy. They describe successful tests of a laboratory-scale version of the device in a study scheduled for the Dec. 1 issue of ACS’ Environmental Science & Technology, a semi-monthly publication.

In the new study, Bruce E. Logan and colleagues point out that so-called acid-mine drainage (AMD) is a serious environmental problem that threatens the health of plants and animals as well as the safety of drinking-water supplies, due mainly to the high acidity of contaminated waters and its high content of metals, particularly iron. AMD poses difficult and costly environmental clean-up problems.

They describe development of a new type of fuel cell that is based on microbial fuel cells, which are capable of generating electricity from wastewater. Using a solution similar to AMD, they showed that the device efficiently removed dissolved iron from the solution while also generating electricity at power levels similar to conventional microbial fuel cells. Improvements in the fuel cell will lead to more efficient power generation in the future, the researchers say. The iron recovered by the device can be used as a pigment for paints or other products, they note.

“Nanohybrid” plastic may expand use of biodegradable plastic
Biomacromolecules

Scientists in New York are reporting development of a new biodegradable “nanohybrid” plastic that can be engineered to decompose much faster than existing plastics used in everything from soft drink bottles to medical implants. The study is scheduled for the Nov. issue of ACS’ Biomacromolecules, a bi-monthly journal.

The plastic is a modified form of polyhydroxybutyrate (PHB), a promising biodegradable plastic produced from bacteria that has been widely hailed as a “green” alternative to petroleum-based plastic for use in packaging, agricultural and biomedical applications. Although commercially available since the 1980s, PHB has seen only limited use because of its brittleness and unpredictable biodegradation rates.

In the new study, Emmanuel P. Giannelis and colleagues compared the strength and biodegradation rates of raw PHB to a modified form of PHB that contains nanoparticles of clay or “nanoclays.” The scientists found that the modified PHB was stronger and decomposed faster than regular PHB. The nanohybrid PHB decomposed almost completely after seven weeks, while its traditional counterpart showed almost no decomposition. Researchers also showed that degradation could be fine-tuned by adjusting the amount of nanoparticles added.

The study is the “first report of the biodegradation of PHB nanocomposites” and could lead to wider use of PHB plastics, the scientists say.

A bioprospecting expedition to Iceland’s famed hot springs has yielded new strains of bacteria with potential of producing hydrogen and ethanol fuels from wastewater now discharged from factories that process sugar beets, potatoes and other plant material. The microbes hold potential for combining energy production with wastewater treatment, according to a report on the discovery scheduled for the Jan./Feb. issue of ACS’ Energy & Fuels, a bi-monthly journal.

In the study, Perttu E. P. Koskinen and colleagues point out that ethanol and hydrogen are two leading eco-friendly candidates for supplementing world supplies of oil, coal, and other conventional fuels. Research suggests that there would be advantages in producing those fuels by fermentation with bacteria capable of withstanding higher temperatures than microbes now in use.

Knowing that thermophilic, or heat-loving, bacteria inhabit Iceland’s hot springs, the scientists “bioprospected” scalding-hot geothermal springs in different parts of the country for new ethanol and hydrogen-producing bacteria. After screening samples, including those from springs that approached the boiling point of water, the scientists enriched promising microorganisms that can produce the compounds from glucose or cellulose at high temperatures. The enrichments included those with unusually high yields of hydrogen or ethanol from carbohydrates.

After grabbing headlines for years as the ultimate solution to world energy problems, the “hydrogen economy” has an emerging but lesser-known competitor called the “methanol economy,” according to an article scheduled for the Dec. 3 issue of Chemical & Engineering News, ACS’ weekly newsmagazine.

In the article, C&EN Associate Editor Jyllian Kemsley describes how methanol, an alcohol like ethanol, shows increasing promise as an alternative energy source with advantages over both ethanol and hydrogen. A methanol economy — championed in a 2006 book by chemistry Nobel Laureate George Olah — would not be dependent on bumper crops of corn and could provide lower tailpipe emissions and a reduced fire hazard. Besides powering automobile engines, methanol can also be used to power fuel cells and as a fuel for operating gas turbines at electric power plants, the article notes. It also can take the place of petroleum-based feedstocks for making a range of chemicals and materials, including plastics.

China now blazes the trail toward a methanol economy, putting 1 to 2 billion gallons per year toward fuel, according to the article. Researchers worldwide are now exploring new, more efficient methods for making methanol. One of the downsides of producing methanol, however, is that carbon dioxide, the primary gas behind climate change, is a byproduct. To remove that liability, scientists are also developing processes that can convert the carbon dioxide into more methanol or other usable materials, the article states.

Bytesize Science is an educational, entertaining podcast for young listeners. Bytesize Science translates cutting-edge scientific discoveries from ACS’ 36 peer-reviewed journals into stories for young listeners about science, health, medicine, energy, food, and other topics. It includes content from Chemical & Engineering News, ACS’ weekly news magazine. New installments of Bytesize Science are posted every Wednesday and available without charge. The archive includes items on environmental threats to killer whales, a scientific explanation for why some people love chocolate, some unlikely new uses for compact discs, and a hairy tale about “hairy roots.” The podcaster for Bytesize Science is Adam Dylewski, an ACS science writer and recent graduate of the University of Wisconsin-Madison with degrees in genetics and science communication.

The American Chemical Society’s workshop, 'Cooks with Chemistry —The Elements of Chocolate' [Web link: http://acselementsofchocolate.typepad.com/elements_of_chocolate/] provided reporters with a delectable assortment of new information on the world’s favorite treat. Held Oct. 11, 2007, at the Institute of Culinary Education in New York City and sponsored by the ACS Office of Communications, the chocolate workshop featured presentations from Harold McGee and Shirley Corriher, award-winning cookbook authors, and Sara Risch, the noted food and flavor chemist. With chocolate consumption nearing an annual peak as the holidays approach, we are providing content from this event to news media unable to attend the workshop. The material includes ACS journal articles about the chemistry of chocolate; advice for cooks who run into trouble with chocolate recipes; tips on how to successfully use “new” chocolates in old favorite recipes; and a fascinating comparison of the health benefits and flavor components of different kinds of chocolate. For interviews with the chocolate workshop participants or other information, please contact newsroom@acs.org.

Please credit the individual journal or the American Chemical Society as the source for this information. 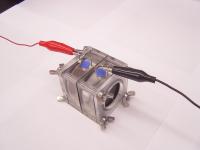