Suburban development is forcing some songbirds to divorce, pack up and leave and miss their best chances for successful reproduction.

As forested areas increasingly are converted to suburbs, birds that live on the edge of our urban footprint must find new places to build their nests, breed and raise fledglings. New research published Dec. 28 in the journal PLOS ONE finds that for one group of songbirds -- called "avoiders" -- urban sprawl is kicking them out of their territory, forcing divorce and stunting their ability to find new mates and reproduce successfully, even after relocating.

"The hidden cost of suburban development for these birds is that we force them to do things that natural selection wouldn't have them do otherwise," said lead author John Marzluff, a professor of wildlife science in the University of Washington's School of Environmental and Forest Sciences.

"Because development requires that these birds move, we force them to abandon the places they selected and go elsewhere, which often entails finding new mates when they wouldn't have otherwise."

Avoider birds are species that are known to decline in response to urbanization, for example when forested areas are removed for developments. In the Pacific Northwest, two avoiders are the Pacific wren and Swainson's thrush -- birds that are generally shy of humans and rely on groundcover and brush such as fallen trees, root balls, shrubs and ferns for breeding.

The manicured yards of many suburban neighborhoods often do away with native habitat, and these species must flee to be able to nest and mate. When they leave, the birds travel uncharacteristically far for breeding adults -- about one and a half football fields, on average.

The researchers suspect this forced dispersal is the most damaging aspect of suburban development on birds and the reason why some species decline when forests are replaced with subdivisions. When forced to move, the avoider birds largely failed to reproduce again for at least one year after relocating. The whole transition to a new home and often a new partner might cause a bird to lose half of its breeding years.

"These birds don't like to move once they have established a territory," Marzluff said. "But when it comes to having enough food and safety for a nest, and being able to attract a mate, that's when things get tough. That's probably when they decide to move."

In general, monogamous birds will "divorce" their mate and move to a new territory if they have a reason to. Maybe they miss a season to reproduce because of a poor partner, and moving is beneficial because ultimately it increases their reproductive success. But for sensitive species, the opposite is true when movement is forced.

The researchers also studied another category of bird, called "adapters" or "exploiters," which includes species that tolerate or even thrive around human development. These are the song sparrow, spotted towhee, dark-eyed junco and Bewick's wren. Sparrows and towhees will live in tandem with humans, often finding suitable breeding grounds in backyards, while Bewick's wrens will gladly nest in a bird box and juncos even see opportunity in a door-hung Christmas wreath.

The adapter birds also moved around, but mainly of their own accord to improve their chances of breeding successfully, not in response to changing landscapes. As a result, suburban development didn't appear to impact their ability to reproduce.

The researchers identified and monitored hundreds of individually marked songbirds from six common species found in Seattle-area suburbs. For about 10 years, Marzluff and a number of graduate students tracked bird activity in three types of landscapes: forested preserves, already developed suburban neighborhoods and neighborhoods transitioning from forest to subdivision. By placing bands around the birds' legs and mapping sightings of mated pairs and nest locations, the researchers were able to tell when a bird relocated, broke up from its mate or stayed put year to year.

This study's long tenure and focus on multiple species is a first for the field and allowed researchers to compare birds' behavior across species. It is also one of the only studies to look at how and why birds disperse in the urban ecosystem -- and what effect that can have on mating and breeding.

The researchers expect a similar pattern in other cities and suburbs across the U.S., though the species involved will vary depending on region. In other parts of the world where species diversity is much higher -- in the tropics, for instance -- the effects of urbanization on birds dispersing and some ultimately failing to reproduce could be much greater, Marzluff said. Instead of just one or two territories lost to deforestation, entire colonies that are specific to a small area might be lost.

"To conserve some of these rarer species in an increasingly urban planet is going to require more knowledge of how birds disperse," Marzluff said. "I expect that as we look more closely, we will find birds that are compromised because of us."

This study was funded by the National Science Foundation and the UW.

Songbirds divorce, flee, fail to reproduce due to suburban sprawl 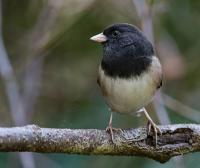